Gold VS Bitcoin; The Fight Of The Century 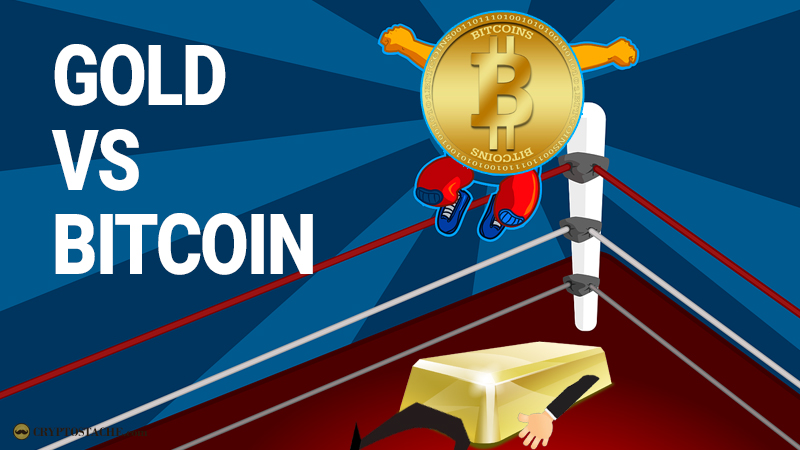 Ding Ding Ding! There they go folks! Bitcoin comes out swinging with some heavy punches early on, but is it enough to take down the long time store-of-value champion? Does this situation sound familiar? No, it's not the Mayweather vs McGregor fight, but it DOES have some eerie resemblances!

Humans have been in love with gold for thousands of years and for very good reasons. It lasts forever, it's easy to work with and shape, it can be used for a lot of things (especially the tech of today), and it sure is purdy ta look at! We have used it as a store of value for a long time, it has a long and proven track record that you just can't ignore. While traditionally gold has been the go to long term store of value, the fact that many fiat currencies are no longer backed by gold (including the US Dollar & British Pound, gasp!) combined with the surge in Bitcoin, you get many wondering is Bitcoin a better buy versus gold?

Digital Gold From Another Mother

Bitcoin has been likened to a sort of "digital gold" for a long time now. While it's overall market cap may not come close to gold anytime soon, the first digital cryptocurrency ever is certainly gaining mainstream steam! Gold & Bitcoin share a lot in common, but just as many differences as well. They both do things very well and also lack in other ways too.

Here is my list of gold's pros & cons in relation to it being a long term store of value for investing.

As you can see I have "easy to track" on both columns because I feel like it can be a good thing, but also a bad thing as well. Gold has some great pros, it's track record I think is its best pro. While gold is a standard, it does have a few downsides that are growing larger as more things go fully digital and online.

Here is my list of Bitcoin's pros & cons in relation to it being a long term store of value for investing.

Bitcoin has a few attributes that gold does not, but it is less stable at this time as it has only been around for about 8 years.

Will Bitcoin eventually take down the all-time champion Gold? I don't think gold is going anywhere soon, but Bitcoin is going to change a lot about the way people think about investments and stores of value. I will give the slight edge to Bitcoin, and only because of the digital advantage. We live and breathe this digital world and it only makes sense to evolve our systems to match the direction we are headed. Gold has been a long time favorite, but now he has taken on a mentor...

While threats exist to both in the long term as a store of value (Bitcoin vs quantum computing, and Gold vs asteroid mining!), the price of 1 Bitcoin has surpassed the value of 1 ounce of gold and I don't see Bitcoin slowing down anytime soon. This may result in a flood of people leaving the stock market, but will the also abandon their precious? That's a hard one to call, but I can tell you that my money is in Bitcoin.