Why There Are Hundreds Of Coins & Tokens Other Than Bitcoin 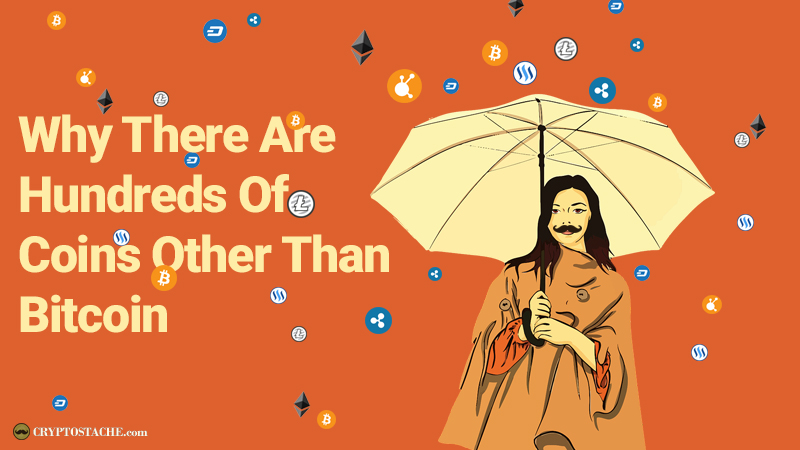 If your only exposure to cryptocurrency is through Bitcoin then it might be quite the shock when you start to read & research up on the cryptoworld and find that there are hundreds of cryptocurrencies out there other than Bitcoin. Of course Bitcoin is the most popular cryptocurrency because it was the first. A pioneer exploring new digital landscapes. Bitcoin has the most recognition, but there are hundreds of coins out there and they all have different purposes. Keep reading as I break down why there is more then just Bitcoin out there and why that is actually a great thing for you as a beginner!

While cryptocurrencies are still not a “mainstream” thing just yet, the Bitcoin brand name has been around for almost a decade now and it certainly has started to pick up global recognition. Bitcoin is the Versace, the Porsche, the [insert high-end brand name here] kind of brand now. It is for this reason, it may be that a beginner in cryptocurrency has only ever heard of Bitcoin and has no idea that there are thousands of other similar cryptocurrencies out there.

This is a pretty hard fact to swallow at first. I didn't understand why at first either. “Why can't there just be Bitcoin and everyone just use that?” It's a simple enough question and a natural one for beginners to ask. I felt the same way, but once I learned HOW Bitcoin works and why it does what it does then I realized the need for much much more then just our good friend Bitcoin.

Solving Problems With The Blockchain

The real reason there are so many coins & tokens is that while Bitcoin acts somewhat like a currency, not all cryptocurrencies actually work the same way. In fact, most are very different from each other and serve some purpose. Look at the other top coins like Ethereum (which I intro in this article), Ripple, Bitconnect, and Steem. They all make specific uses of blockchain technology. If you are still a bit sketchy on blockchain technology see my article here, but the gist of it is that all these platforms use the blockchain as the base of their application or software and the concept has allowed for a solid foundation for new developments. Each coin has a use in the version of blockchain used in the project and that is why we end up with a flood of coins and tokens as more and more software companies enter in the market with their projects.

I almost like to think of each one of these coins or tokens as stocks of the project. They can be collected and traded. Some days they are up and others they are down… Now that I think about it, they are pretty much like Pogs. The only difference is that now we are older and playing for bigger stakes. Don't let the plethora of coins & tokens overwhelm you. Start with the big 3 (Bitcoin, Ethereum, Litecoin) learning all you can about them and then branch out to smaller coins that may support applications that you will use on a daily basis. Steemit.com is a great example of a cryptocurrency based project that I use almost every day. Research, watch, bet and slam away! It's the wild wild west out there for the time being and we happen to be living in a Coin-ucopia!

All Your Coins Are Belong To ‘Stache