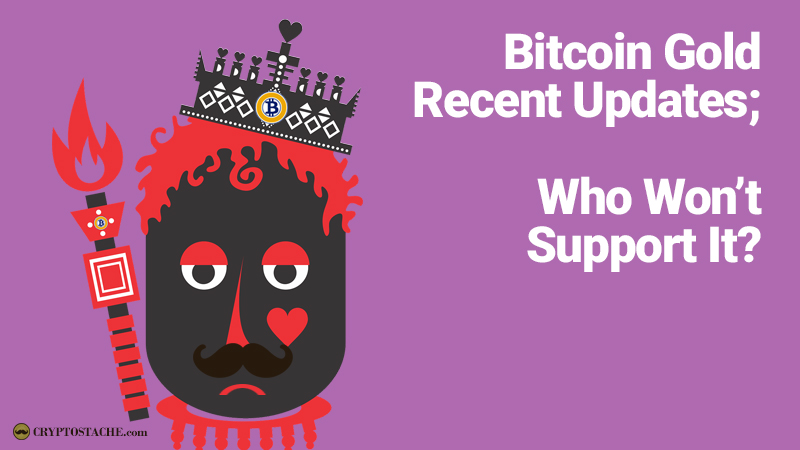 Gold is ALL THE RAGE these days… but maybe not in the way you might be thinking of. Not physical gold you silly mustache fans, but Bitcoin Gold! Also, when I say “rage”, I kinda mean rage… If you have not heard of the contested hard fork coming up on October 25th called Bitcoin Gold, I will walk you through the basics as well as give the most recent updates for those already familiar. PLUS, I cover how my favorite cryptocurrency wallet will handle the situation and what that says about this fork.

What Is Bitcoin Gold?

Bitcoin Gold is the name of the new currency intended to fork off from the Bitcoin main blockchain on October 25th. If you don't know what a “Fork” is, then check out this recent article I posted about them in general. Not all forks result in a new currency, but this is an aggressive change to Bitcoin and not everyone agrees. Their are not a lot of details on “how” Bitcoin Gold will do the things they want to do, but the main reason for this fork is to make Bitcoin mineable using GPU's instead of very expensive and power hungry ASIC's machines. They claim this is to keep Bitcoin as decentralized as possible, because as it stands it is too expensive and resource intensive for individuals to mine Bitcoin so the majority of Bitcoin mining is done by large pools or mega corporate miners. This leaves the average guy out and the Bitcoin Gold team feels that their new currency is the solution, but is it really a solution?

Bitcoin Gold (BTG) as a solution to this specific mining decentralization problem has been a hot debate this last month and not all are convinced. Since announcing their plans, there was VERY little information provided by the Bitcoin Gold team and speculation ran wild. Unlike Bitcoin Cash (a previous hard fork of Bitcoin I wrote about earlier this year), the Bitcoin Gold team had no solid plan provided on how they were going to accomplish any of their goals, no information on the development team, and a website that was pretty much blank.

While there are a lot of skeptics of this project that are just calling it a “cash grab”, the Bitcoin Gold team finally put out a press release a day or so before also updating their website with some actual information. The press release is fairly lengthy, and they basically attempt to refute the negative claims that people have been circulating. You can download and read the entire PDF version of the press release here:

Maybe a document like this has helped to quel those that were quite missinformed, but it still does not provide a complete roadmap for their project nor does it provide the type of technical information that other developers (think wallets, exchanges, etc) a way to deal with Bitcoin Gold on their applications. While the updates to their official website, http://btcgpu.org (not even https!), do give a little more information, its not much. They now list a little about the intended features, a comparison to Bitcoin and others, a few photos of their team, a very basic FAQ (although it does talk about the mining aspect), and a short list of those that fully support the project, most of which are mining-centric.

From my perspective, the support for this project is lacking. The overall idea behind the fork is, at heart, a good one, but I think it has been executed badly. While doing research I found that many companies and dev teams will not support Bitcoin Gold like they may have with Bitcoin Cash, and the BTG team is not making it easier for them to do so.

Recently I reached out to the support team of my favorite wallet, Exodus, about the Bitcoin Gold fork and if they planned to support it the same way they have with Bitcoin Cash as they JUST added Bitcoin Cash & Ethereum Classic to their stable of fully supported coins. I must admit, I initially could not find any info on Bitcoin Gold on their website or a search online, but after a quick message to their support team all was clarified! I got an almost immediate response from Doug Barbieri, Exodus' Community Support Engineer (love that title!), and he gave me the break down and also pointed me to the FAQ article already on their site that I overlooked which explained everything in detail (thanks Doug!). Here is the full body of that post below, but you can also check out the page on their site here.

“Just like the Bitcoin Cash fork, there is another fork coming October 25th. One thing to understand is that it is not the Segwit 2x upgrade to the Bitcoin Network (that comes next month in November), but instead, it is a clone of the main Bitcoin blockchain that will result in a 1:1 split of your Bitcoin funds. So if you have 1 Bitcoin you will receive 1 Bitcoin Gold. The goal of Bitcoin Gold is to make it possible for anyone with GPU graphics cards to mine Bitcoin Gold just using their home computer, which they believe will make mining more democratic. This is opposed to big companies that mine Bitcoin using computers called ASICs that costs thousands of dollars each, and because of the prohibitive costs of mining Bitcoin, this pools hashing power into a select group of companies.

The only problem with Bitcoin Gold is that it is still in active development, and its current state does not provide the necessary resources for Exodus to provide a seamless experience for our users. Therefore, we will not support Bitcoin Gold like we did Bitcoin Cash. We will be concentrating our efforts on the upcoming SegWit2X fork in November and will know more information as the date gets closer.

As you can see, the Exodus team does not plan to support this fork like they did with Bitcoin Cash (although if your coins are in an Exodus wallet you can still use your private keys to get your Bitcoin Gold in an official BTG wallet), but instead will be focusing their efforts on the upcoming SegWit2x fork planned for sometime in November.

I am standing by the Exodus team 100% and I think they are making the right decision on this one. I will be leaving my Bitcoin in my Exodus wallet through the October 25th snapshot, but I will still claim my free Bitcoin Gold as soon as possible and probably just dump it for more Bitcoin or my Altcoin of choice. This is just MY plan, do your own research and come up with a plan that works for you and your investments. Hopefully I have shed some light on this subject and those that are Exodus fans or Bitcoin Gold fans have the information they need to go forth and ‘Stache that crypto!

I Have A ‘Stache Of Gold!

6 thoughts on “Bitcoin Gold Recent Updates; Who Won’t Support Them?”