Bitcoin Open-Ended Mining Is Back At Genesis Mining 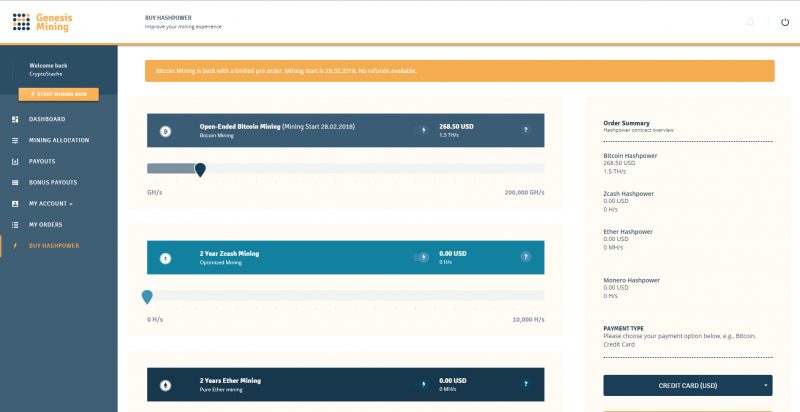 I have been interested in mining ever since I heard about Bitcoin in 2013. I never got on board with it then (kicking myself!) when I could have easily used my work computer to mine Bitcoin. Since getting back into cryptocurrency this last year or so my mining spark had once again been re-ignited! My plan was to build my own multi-card mining rig and starting basic, but after I did more and more research I realized I needed a more sustainable way of mining. My idea was to first get a small solar/wind power generation & storage setup and then build the mining rig so the beautiful California sunshine would power my efforts. Then I realized how incredibly expensive that was and I would rather wait till next year for such a large project.

Today is a great day though because my SECOND OPTION is now on the table again! Genesis Mining is by far one of the most recognized & trusted names in Cloud Mining (my second option!) and I was a bit sad that once I came to the conclusion that I didnt have the resources to build my own rig I noticed that Bitcoin mining contracts on Genesis were SOLD OUT! This was a few months back and I have been waiting and waiting and waiting for them to offer them again and the time is finally here guys!

I had heard some rumors about them opening up Bitcoin mining again this week (thanks Sunnydecree) and I knew I had to JUMP on this chance before they were sold out again. This morning I noticed an ad on Facebook saying Genesis Mining Bitcoin contracts were back in stock, so I headed over the like lightening and started the process. Unfortunately the website did NOT want to play nice…

A Few Bumps, But We Have Lift Off!

The site loaded SUPER slow for me and it took forever to get logged in and to get to a purchase screen. They did, in fact, raise the price of the contracts a bit and 1 terahash will cost you $179 USD. After a few tries to get my purchase to go through I was finally successful! I ended up going with 1.5 TH to start which cost me $260 because a got a small discount for using a discount code. The mining contract does NOT start till February 2018. While I wish it could start now, I can be patient till February. Since hearing about Genesis, I really wanted to give cloud mining a try and document everything I find so you can see for yourself just what it is all about.

If you have been thinking about Bitcoin Mining and don't have the time or funds to build your own rig, consider Cloud Mining with Genesis. If you want to use my Secret ‘Stache discount code you will save 3% on your entire order! Of course if you don't want a discount you can sign up directly, and don't have to use my affiliate link. If you are not signed up yet, you can sign up on my team here.

The ‘Stache Is On Genesis Cloud 9!