Bitconnect Challenge – Day 120: A Sinking Ship Or A BCC Bull? 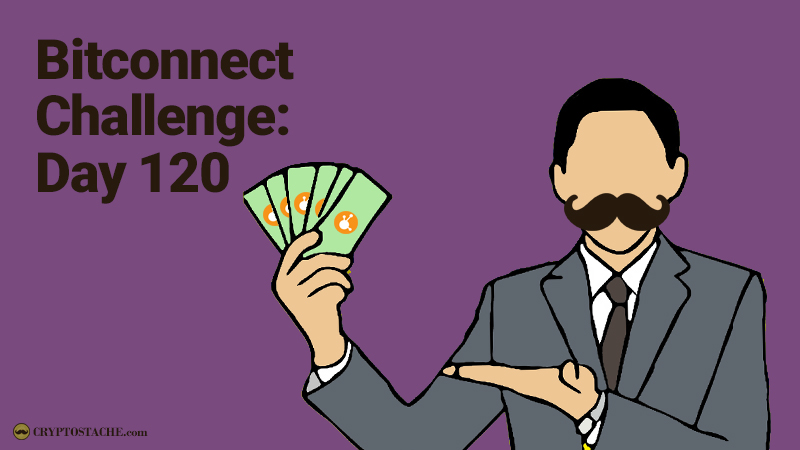 Are you still following my Bitconnect Challenge? We are now on day 120! Earlier this year I saw SO many people talking about Bitconnect. Many were saying it is a ponzi and a scam and then you have the other side claiming how amazing it is and the profits they are making are real. I decided to take on this controversial platform for my blog and give an honest opinion. I took the risk of losing my money because I felt it would be a hot topic to blog about and hopefully help others to make an informed decision not influenced by the “hype”.  Since my last post a few items have surfaced which have made me question the future of the platform. Will The ‘Stache go down with the ship or will our hero survive to crypto another day?!?

To recap my strategy, I have been converting my payments from USD to BCC and then into Bitcoin. I am not doing any reinvesting nor have I really been giving out my referral code (you can find it in a few of my articles, but I have made no affiliate sales). With 0 referrals and $1010 invested on August 5th I have earned $ 1,192.71 in USD.

Personally this is a HUGE milestone for my Bitconnect Challenge as I have made my initial investment of $1010 back before the halfway mark! This means that even if something happened tomorrow I would still be in the GREEN and then some. As you can see in this total, I have earned $1,192.71 in USD payments, but I have been converting all of that to Bitcoin. With the epic gains BTC has made in the past few months the amount of Bitcoin I have withdrawn total is: 0.22832815 BTC. At the writing of this article, Bitcoin is priced at $9762 per coin (so close to that magic $10k mark!). So if you add that up, I have made $2228.93 worth of Bitcoin in total!

Let's not get TOO excited just yet… While this looks like great returns, if I were to have just held on to my original Bitcoin that I used to initially invest in Bitconnect (a total of 0.30865318 BTC) it would be valued at $3013.07 right meow! That is a difference of $784.14 in profit if I had just held onto my BTC instead of lending it out on Bitconnect. JUST HODL!

While it does seem like holding my Bitcoin would have been the way to go, I still have 120 days left on my lending cycle. What this means is, at the end of my cycle (which happens to fall on April 1st, 2018, so bad I know… hahaha), I will be getting my initial investment of $1010 back in USD. On top of that, I have another 120 days to earn interest payments every day and pile up more Bitcoin. With the price of both Bitcoin and Bitconnect skyrocketing these days, it is sure to say that my USD daily interest payments are not going to be buying me much, but I do think that in 120 days I can make up the difference of Bitcoin that I initially invested in the platform. In the next 120 days I would need to make 0.08032503 Bitcoin to have then pulled out the same amount of Bitcoin I put in the platform originally. I think that is certainly an achievable number over the next 4 months, as long as the next few items that have been circulating don't sink the BCC ship like the titanic.

Star Struck From The Register

The leaders and formal legal entity and location of Bitconnect has remained a mystery since the platform started. They seem to have a major presence in the East, but in the last few months a document from the UK's Companies House division has issues that the legal entity by the name of “BITCONNECT LTD” will be removed from the register if action is not taken. At first glance, this seems to be a big problem, but if you just dig past the surface some things come to light. Here is a link to the Companies House site as well as a link to the PDF that says they will be removed from the register. 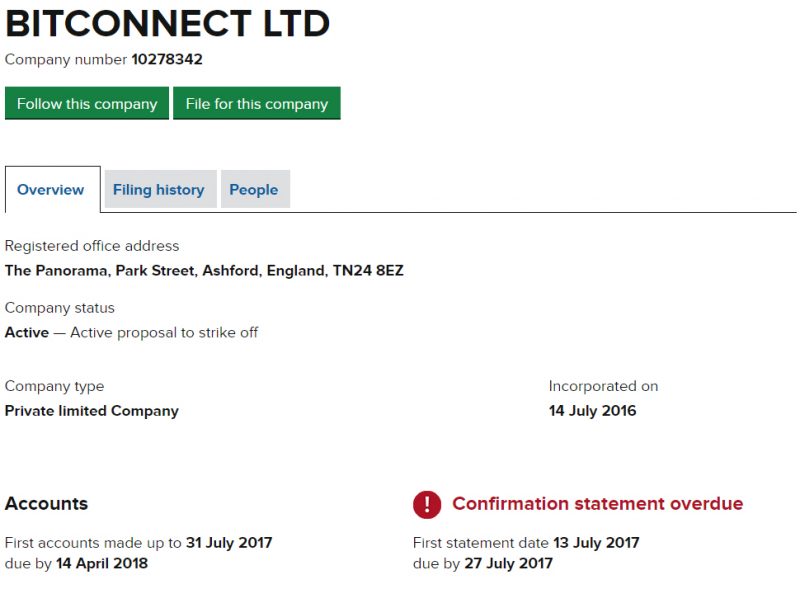 Most business registry entities require you to file statements of information to them on a regular basis. Looking at their page for Bitconnect it clearly says “Confirmation statement overdue”. This means that Bitconnect did not file a required statement of information on the company and because of this, Companies House has issued a statement that the company will be removed from the official registry of companies in the UK after 2 months from the filing of the notice. Here is the issue I see with this.

I myself just had this happen to me… I am a good business owner, but I suck at government type paperwork. It is just NOT my thing, and I honestly hate all the hoops you have to jump through just to do business in the US, not to mention California! I did not renew my company information and because of this my company got dissolved. I had to re-file all the paperwork again, and pay higher fees to work it all out. The point being, these statements of information that are required are easy to forget or not care about in the first place. This is NOT to say that I condone their actions, I don't. For such a large, and well funded, organization they should have these tiny ducks in a row. Regardless it does not spell disaster. One way or the other, we will find out after January 7th, 2018 if this will even effect Bitconnect in anyway as they have been giving 2 months from the time of the notice to contest.

Is It Visa? Is It Mastercard? Is It UQUID?

In my last Bitconnect Challenge article I talked about the fact that Bitconnect coming out with a linked BCC/BTC debit card was a good sign that they are in it for the long haul. Companies don't typically spend a lot of time on putting a new product out if they just plan to exit scam everyone. Since they announced this however, a few holes have formed. First, when announcing the BCC Pay platform they showed a giant credit card with a Visa logo on it. Then people called them on it when all the sudden on the website it had changed to a Mastercard logo. After some poking on social platforms it turns out that Bitconnect does not have a deal with EITHER company, but really with another crypto debit card issuer called UQUID. You can see now on their BCC Pay site, they don't have a logo on their cards any longer. I don't like uncertainty, and this makes me uncertain that they will deliver on their product. Sure, a company needs to pivot at times, but this is not smooth sailing in my opinion.

The Ship Is Still A-Float

While these few issues that have come up do merit some discussion I think that the price of their coin has steadily increased and maintained a pretty decent amount of volume (even if most of it is on their own exchange). If you are going to take the BCC plunge, keep in mind this IS a very risky platform due to a lot of the issues I have pointed out. As you can see by my results, without any affiliate sales, I am still on pace to make some good profits. I am personally at the halfway mark, but there is still a lot of time to go and a lot of ocean to sail!

4 thoughts on “Bitconnect Challenge – Day 120: A Sinking Ship Or A BCC Bull?”