cryptocurrency ICO where I stache my crypto

Where I Stache’ My Crypto: Episode 4 – ICO Purchases 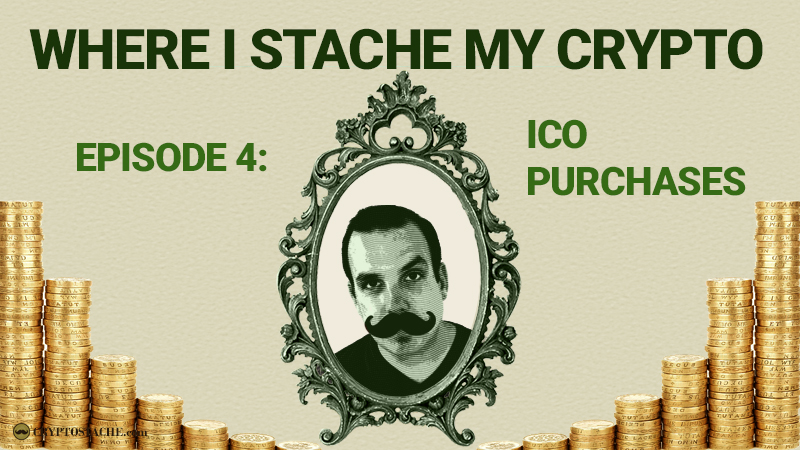 Whew! It has been a busy few months! I have been working away at posting content on my website and preparing my online video course, but I wanted to jump back into my regular posting about my actual investments. My plan was to do these updates 1-2 times a month, but the cryptoworld moves fast and I have found myself with a lot of people seeking my help to get them started in Bitcoin & cryptocurrency. Follow The 'Stache as I talk about the ICO's that I am invested in and where they have gone or where I think they will go!

First off, I want to express how frustrating ICO participation can be at times. There are dozens of projects every month jumping on the scene. Some are super legit, while others are clearly just scams (crypto fans have seen our fair share this year). Knowing which ones to even start to dive into can be a challenge. On top of that, many ICO's won't sell to US residents because of our super strict financial regulations on securities, so I have missed out on a few choice projects because of this (although I have a NEW solution which I wrote about recently here).  No matter where you live or what you are interested in, there are always hurdles you will have to jump in order to invest in these startups.

These two coins compliment each other and were part of the first ICO that I ever participated in. Neverdie (NDC) & Teleport Tokens (TPT) are essentially gaming tokens that work in a handful of online games. This is one that I bought into because the main MMO that I play (Shroud of the Avatar) announced that they would be incorporating these into their game at some point after official launch. I bought 336 NDC at the ICO price of $0.25 and also 312 TPT at $0.10. While the company already has a working product (check my original post here about this for complete details), once the coins hit the exchanges they completely tanked! Here is how they are doing right now.

As you can see the coin is worth about $0.03 now... I would consider this a VERY bad investment by all accounts. The TPT tokens are not on an exchange yet, so maybe those were a safer bet. To date, this is by far my worst investment and I have lost most of my value and it just keeps going down. I don't care. I bought these coins specifically for my favorite online game and I will use them there when they are incorporated.

The reason I am invested in the Crypterium ICO is because of their intentions to focus a large part of what they do with their decentralized banking platform on merchant solutions with a focus on mobile payments (read the full review here). This means helping businesses with the right kind of tools to take crypto as payment on a daily basis. I think this one factor alone will put them in great position for 2018. I purchased 82.1849 CRPT tokens at the ICO price of 0.0001 BTC per token (keep in mind I bought in when BTC was on a major dip in October). The ICO is not over yet, it ends on January 13th. They have a solid team and plan to launch on several exchanges, hopefully this goes well for me!

I just wrote about investing in the WAX ICO recently and I think this is a VERY strong project. WAX is the WorldWide Asset eXchange for digital skins (read the whole review here). This is an established company that is basically just porting their multi-million dollar gaming asset business to the blockchain. I bought in a bit late on this one just as Ethereum was making a run at $400. I purchased 30 WAX tokens at the ICO price of 150 WAX = 1 ETH. This came out to 0.2 ETH. While I think this is a great project that will go a long way, the price per token was a little high for my liking at the time of my purchase. Should have gotten in sooner! Tokens will be distributed prior to Dec. 29, 2017, and they will look to hit exchanges in the first quarter of 2018.

"Techcoin" is the tentative name for this mining contracts based ICO token that has recently been added to USI-Tech's offerings. I invested in this particular ICO as part of my ongoing USI-Tech Challenge article series for testing purposes of the platform (read my review here). I would consider this a "pre-ICO" as the token you can purchase is really just a place holder for the upcoming ICO coin. The information on this project is very limited and I honestly just took a blind chance on this and invested as little as I could. I purchased 100 USI-Tech tokens at a price of $57 which comes out to $0.57 per token. I am interested in the USI-Tech platform and while many have their doubts I just want to invest a small amount as a gamble and see where it actually goes for myself. So far it is a waiting game, and only 2018 will tell if this was a good jump in or not.

As you can see, I don't invest it THAT many ICO's. I like TOO many projects and if I invested in each one of them I would probably be broke at this point. I am a HODLer all the way and from most of the numbers I have run, it seems best to hodl my BTC while it is on a huge rally like it has been all 2017.

If you know of a great ICO that I am missing or have some thoughts about any of the ones I mentioned here, post in the comments!

Technical Analysis for crypto can be confusing to learn at first, but this is an easy read to get started.