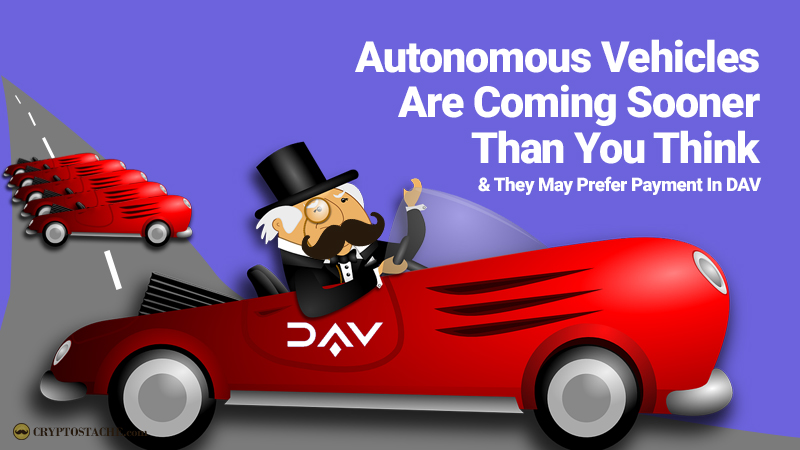 If you follow me regularly or know me personally then you know that I love tech & gaming stuff like robotics, green tech, MMORPG's, and of course anything autonomous! A self-driving car has been a sci-fantasy for longer than I have been on this watery rock, and we are getting closer and closer to this reality. The new Tesla models have a very good auto pilot feature, Google has been testing and developing self-drive tech for years already, and Uber is poised to have one of the first self-driving autonomous fleets of cars in the US. This transportation revolution is coming way sooner and way faster than you even realize (just like cryptocurrencies!), so it is no wonder that this tech is making its way over to the blockchain with companies like DAV.

DAV stands for “Decentralized Autonomous Vehicles” and it is a blockchain based computer network that allows self-driving vehicles (not just cars, but drones & trucks too) to talk to each other and exchange information. This creates a decentralized network of self-driving cars that can meet the needs of humans on-demand.

“Users can pay for the use of any of those vehicles with a token to get a ride somewhere or pick up and deliver a package. People who own those vehicles or the charging stations on the network can make money for the services they provide. This means the average person could have an entire network of self-driving vehicles at their fingertips to bring them anything, or to take them anywhere, with one token.” 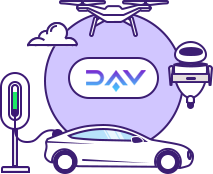 All of these exchanges are done through the use of DAV tokens. These are the blockchain based tokens that drive (pun intended!) the entire network. The DAV token will be an Ethereum based token and will enable self-driving cars to interact with each other (and humans) in a trustless manner. This general concept is what will replace Uber in the very near future if they don't deploy this tech as well. The whole goal here is to make transportation of physical goods more efficient and create a network of service vehicles that allows anyone to monetize transportation assets.

The Autonomous Future Of Transportation

While the self-driving future may still be a few years off from now the DAV team are getting a head start to what is going to be a major global shift in the way we move things around. Millions will be put out of work from truck drivers, package delivery, taxis, and more. Autonomous vehicles will be safer, more efficient, and cheaper for every application. We are already seeing a shift in consumer facing autonomous applications, AI interfaces, and automated replacements for things like fast food and grocery store clerks.

This is just the tip of the iceberg. The real ship sinker is when fully autonomous cars are in full production. I have been thinking about this subject for a long time and I even came up with a concept car for it in my college years that I never pursued. Make no mistake, this will happen and it is companies like DAV that are leading the way in making it a fair and open market versus under the control of just a few powerful thumbs.

When you are looking at a new and interesting ICO project you always want to look at the team behind the project. I typically don't talk too much about a projects team as they come pretty standard (some great coders, a few “vision” guys, and the advisers that have signed on). The DAV team is a pretty diverse one and they even have a former NASA astronaut & space shuttle pilot as part of their team. I think having a very well rounded set of team members is key and so many projects just seem to forget this, the DAV project does not.

Investing In An Autonomous Future

Personally I am investing in an autonomous future. I missed previous boats of the internet boom (I was getting TOS'ed from AOL for hacking chat rooms), the 3D printer was also something I saw and used early on that I would have loved to have invested in (I was in college using the first basic ones, but also drinking and having a little too much fun). I am thankful every day that I caught the cryptocurrency wave before it started hitting land and it has opened so many new doors. I won't miss out on the next big tech opportunity and I am long on tech like DAV because of it. Now this is not a quick play by any means for me. I plan to invest in coins like DAV that have solid long-term future potential and hold them.

With a project like this there is bound to be competition and of course this future of self-driving cars is NOT at our doorstep just yet (I predict by 2025 we will be seeing fully autonomous fleets in major cities). There are some large hurdles to overcome for DAV, but regardless the concept they are pioneering is one that can't be stopped for too long.