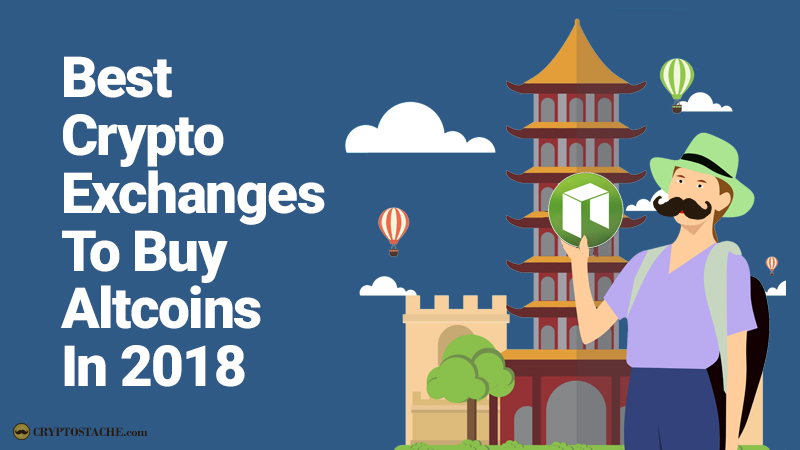 Are you still holding that Bitcoin you bought when you first jumped into the cryptocurrency market for the very first time? I know that, for the most part, I am not. I am, of course, still a supporter of the “OG” cryptocurrency, but my initial BTC investment has certainly been diversified into other Altcoins since. The advice I had always heard, and seems to ring true based on my personal experience is; “Diversify Your Portfolio!”

While this may be sound advice, when it comes to cryptocurrency this is much easier said than done! Not every exchange will offer every coin you want and the same goes for a wallet to hold those coins. Regardless, if you want to buy Altcoins in 2018 to maintain that diverse portfolio then here are my top 5 cryptocurrency exchanges to buy from. I picked these exchanges because each of them offers a HUGE number of Altcoins for trading, and tend to be the exchanges that will list the newest coins before anyone else. It's Altcoin heaven!

Binance – Lets face it, in the last six months Binance has risen to become one of the most used exchanges and this was all because of Altcoins. While other exchanges determine what coins go on, Binance polls its users so new coins get added often. They have their own utility token that you can use to save on transaction fees. Like all the exchanges on this list, they have a huge list of coins to trade with NEO and TRON being very popular on the platform.

Kucoin – This is also a newer exchange that saw a lot of traction while places were being overrun towards the end of 2017. Similar to Binance they have a voting system for what altcoins will be added to the platform next and they also have their own utility token that gives you residuals from transaction fees while holding. Nano, Dragonchain, and DENT are popular on the exchange.

Bittrex – What can I saw, this cryptocurrency exchange has always been one of my goto's for trading altcoins. They fell out of my favor for a while because they closed registrations to new users and were having issues on their platform, but with all those issues working out I would still consider Bittrex to be one of the top places to trade alts. Bcash, NEO, Cardano, and Lisk are big trades on the exchange.

Cryptopia – When I first started getting into altcoin trading this was the exchange my buddy Rhy recommended to me. They are well established and have a huge selection of coins to trade. I have not done as much trading on here lately as I have on Binance or Kucoin, but this is still a solid choice. Electroneum and Reddcoin seem to be very popular here.

CoinExchange – These guys are new exchange and while they have the lowest typical volume of any of the choices here they have an unprecedented amount of trading pairs and I started using them as they were my choice to dump my BCC after all that Bitconnect stuff went south. I don't use the exchange a ton now, but I am keeping my eyes on this one for sure.

COSS – I slept on checking this exchange out, even though my buddy was always talking about it. They have a VERY sleek interface and also have their own utility token called COSS. Not a ton of action right now, but I feel like this could be the next Binance if they keep things going. I wanted to mention it because, while it does not fit in as a “top” exchange, I think it's atleast worth checking out now while they are very new.

Changelly – Ok this is not really an exchange so much as it is a place to swap your coins in a very easy way. I take a few issues with Changelly's services, but overall they make it really easy to swap quite a few coins for other coins instantly. This is similar to Shapeshift, which I have talked about a lot in the past, I figured it would be good to give an honorable mention to Changelly as well because I love their ease of use.

Well… that does it folks! Those are my top 5 cryptocurrency exchanges for trading altcoins. If you can't find the coin you want to trade on one of those exchanges then it's probably a scam and you are doing yourself a favor!

You Can Lead An Altcoin To Developers But You Can't Make Them Moon!

2 thoughts on “Best Crypto Exchanges To Buy Altcoins In 2018”