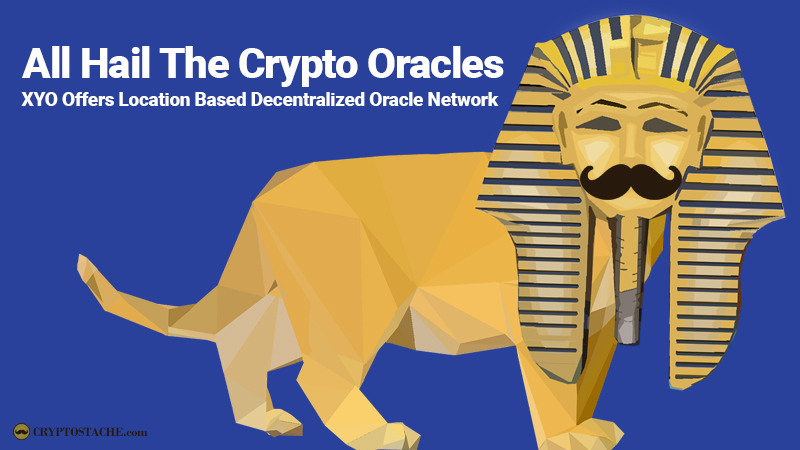 Diving deeper into the crypto rabbit-hole, I run across a ton of interesting projects and learn more and more about blockchain and associated technologies. If you step back and look at the greater cryptocurrency ecosystem as a whole you start to see a lot more going on than it seems. If you are still working on figuring out the basics of Bitcoin and how it really works, you might consider consulting The Oracle…

Visions of two pale blue sphinx statues standing guard on either side of a young Atreyu, ready to look within and face his own demons & that's kind of how they work in cryptocurrency too. Cryptocurrency oracles are a necessary part of the network and without them, the smart contracts that run all our cool decentralized apps of today and the future would not work. Get your offerings ready as The ‘Stache dives into oracles and how upcoming networks like XYO will help decentralize the niche industry.

What Is A Cryptocurrency Oracle?

Before we can really get into some of the fun stuff we should first understand exactly what an oracle is and does within the cryptocurrency realm. While blockchain is a really great way to keep records because you can't change it, it sucks for obtaining & verifying real-world information like temperature, location, price changes, etc. A blockchain is all about keeping things in chronological order, but data in the real world does not always work like this. This is where oracles come in. The oracle passes real-world information to the blockchain to provide a connection that is “off-chain”, but is a trusted source of reliable data.

An oracle itself is really just a smart contract that acts as a middleman between the information of the real (chaotic) world and the sequential information of the blockchain. This is essential for smart contracts that rely on external data to execute their functions.  Having no information from the outside, a blockchain becomes much less useful, so the job of these oracles is super important for the integrity of a grow and thriving network. Here is a more in-depth article about oracles if you are interested that I found really well written.

The Future Of Oracles

As smart contracts grow in complexity and use the role of the oracle will become more important. For a progressive cryptocurrency future, the blockchain must have reliable, decentralized access to information that is off-chain. Eventually this will probably just be a standardized piece of code that all developers will have in their tool box, but nonetheless participants (oracles) in the network are always going to be needed. Having a decentralized network of oracles ensures that information can be validated by multiple nodes before being sent to a blockchain.

The need for this type of off-chain data is huge at the moment and will continue to grow in the immediate future. With our increased use of location based services I think that this sector will be see one of the largest needs for reliable data that can be pushed to a blockchain. This is where new companies like XYO come into play.

The Need For A Location Based Oracle Network

I talk often about future tech like AI or automation, and recently even talked about autonomous vehicles running on the DAV network. All of these future services rely heavily on location based information. This mostly comes from GPS, but it is information that does not translate directly to blockchain. These future DApps will need a decentralized network of oracles to provide this real-world information in a reliable way, which is why the folks at XYO are working on just that.

What Is XYO Network?

XYO Network is all about bridging the gap between today and the future technologies that will rely on blockchain based structures supplemented with oracle based data. The location-based trade markets are an 11 trillion-dollar-per-year target and XYO looks to be the platform of the future for location based data trading. While GPS is a great tech and provides most of the location data we use, it does have its flaws.

“The need for a difficult-to-disrupt system to complement GPS has been well known for years. GPS is exceptionally accurate and dependable, yet jamming, spoofing, cyber attacks and other forms of interference appear to be growing in frequency and severity. This has the potential for devastating effects on our lives and economic activity.”
– RNT Foundation's President, Dana Goward

This company is building this from the ground up and really has a good handle on the unique challenges they need to overcome. XY (the successful Bluetooth-GPS consumer business side they started in 2012) now has over 1 million location beacon devices circulating in the world. In just a few years, they have created the single largest network of Bluetooth & GPS devices in the world. This is the underlying system in which the XYO network and can be utilized in just about every industry you can think of. I like this snippet from their site that really sums up the utility:

“Because of the advancements we’ve made, we can track objects, from jewelry to cars, down to their exact location in real-time.

This is because everything in the world is defined by their XYZT coordinates; these things cannot leave that space.

As people or objects travel along their T coordinate (time), they interact with one another, creating what’s called metadata. A simple example of this is two or more people in a meeting or a conversation. The conversation is a record of the interaction. In the case of the XYO Network, we are taking this interaction as the time signature between these two parties – two people taking a selfie, making two copies of the selfie, signing both of them, and each taking one. That metadata which was generated is now also a permanent link between the two entities; this is a core protocol that underlies the XYO Network's platform and is covered in detail later.”

Looking at a real world example of this, lets look at tracking a package. With the XYO network you could actually track the package every minute and every second at each step along it's journey and then verify (in a trustless manner) that the package was delivered. Right now, a package has to be scanned in at every stop, but with XYO's mesh network of GPS & Bluetooth devices it all happens in the background and is pushed to the blockchain through the use of their XYO token. The implications of something like this are far and wide. A tokenized, decentralized network of reliable oracles that work off of an already established mesh of location devices. This is the future.

Coming To A Future Near You

We already used these location based type services in tons of industries right now. While most cryptocurrency startups are just a really great idea and a whitepaper the XYO team have been building this network for year already and have the hardware to backup their great ideas. Like all great utility tokens, the XYO token is how you buy and sell this location data on their network and it also works to incentiveize participants in the network (like miners, HODLers, etc). I think that this sort of “connective” technology that bridges the gap between the existing real-world structures and the future-looking structures of blockchain are going to be huge in the coming years.

There is a ton more info on their website about the project and it is really great stuff to read. On top of all this amazingness about the project, they are based out of San Diego in my home state of California!

Good Luck Tryin' To Keep Track Of The ‘Stache!