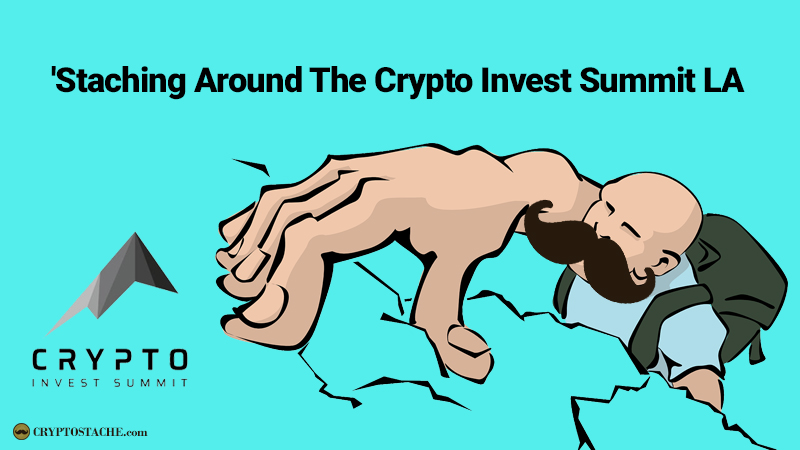 I have never really liked going to conventions. I have gone to a decent amount in my time, for various industries (tech, web, music, architecture), and overall I just never seemed to get as much from them as I expected to. When I started really diving into the cryptocurrency world, I figured my experiences would be pretty much the same, but I was dead wrong! I attended the Crypto Invest Summit in Los Angeles this week and I really enjoyed it. I felt like these are “my type of people”, where I guess I never really felt that way at other conventions. Keep reading for a quick recap of the Crypto Invest Summit and all the things I heard & saw. 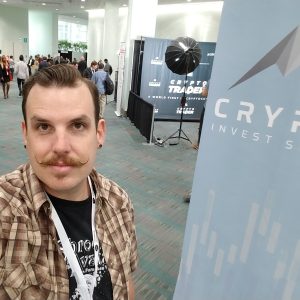 I love the design of the LA Convention Center. It's spacious and surprisingly easy to navigate. The cryptocurrency conference was in the West Hall and it seemed to fit the event well (not too big, not too small, juuuuust right!). While I was unable to attend the first day of the convention I heard that registration lines were epiclly long and I was able to walk right up with no wait and get my badge on the second day. When you walked in, the first booths to greet you were the news booths which I thought were really cool. You could see people doing live broadcasts and I watch a guy doing live editing on dual laptops while they streamed (geeky, I know!). The main showcase floor had about 50 booths and then there was the main hall where all the keynote speakers were at. The 2nd stage was like a “pitch” stage and I didn't really find it worth my time. 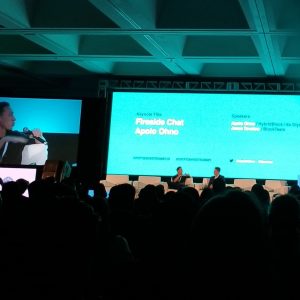 I tried to catch as many of the speakers as I could, because that is where the real value is at these things I have found. Super well organized, and I should know since I have put on 5,000+ person events in the past (check out my recently retired folk music festival here). All the panels were really great, but my two favorites were the Fireside chat with Apolo Ohno (yes the 8x Olympic medal speed skater!) & the Disruptive Blockchain & Distributed Ledger Innovations panel (buzzword-a-rific!).

While the majority of the time when you see a celebrity involved with a crypto project it is usually for promo purposes, but Apolo Ohno knows his crypto (and I don't mean talking heads on Youtube “knowledge”, he REALLY knows his stuff)! He was articulate, knowledgeable, and insightful with this keynote and I think he really hit the nail on the head with his points about usability for the mainstream and crypto education components being key to that. He was there on behalf of his project HybridBlock, which puts an emphasis on learning crypto and being rewarded for it through gamification. I really love this project and will be exploring it in-depth in an upcoming article. They are doing an airdrop of tokens for free, check out full details here.

While they may have crammed in every buzzword they could in the tile of the Disruptive Blockchain & Distributed Ledger Innovations panel, the speakers were all top notch. I made sure to catch this panel because David Bleznak, founder of one of my favorite projects Totle, was on the panel along with Alex Wearn (Aurora/IDEX), Randall Crowder (Phunware), Wilson Wei (Lino), and David Moss from EOS was SUPPOSED to be there, but he bailed out I guess, so Kurt Kumar (Capilarity) stepped up to the plat to fill his spot. The back and forth was great and I really loved that each panelists had a somewhat different take on some major things like regulation & work environment (virtual VS in-house). 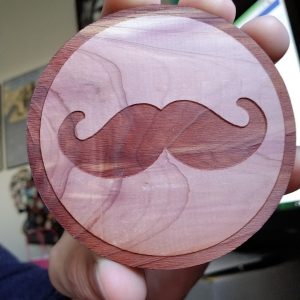 David is super sharp and leads a dedicated team who are just as passionate as I am about crypto and it's purpose and you could clearly see that on stage! I did some writing for Totle this year and last year, and I really enjoyed working with them. They are getting ready to launch their software that aggregates popular decentralized exchanges seamlessly and gives you “one-touch” reallocation of tokens with one of the best UI's I have seen outside of Exodus wallet . Pretty amazing stuff if you ask me, which is why they were the only company I offered my services to in 2017. I presented both David & Jordan (their CPO) with one of my limited edition ‘Stachecoins as a token (pun intended!) of my appreciation of my time with them and their hard work in crypto.

I wanted to hear more from Wilson Wei of Lino, but I think the language barrier limited his obvious wealth of knowledge and intelligence slightly. Alex Wearn's IDEX project I have followed loosely, but it was cool to hear about their hybrid decentralized tech straight from him. Kurt was funny! I don't know what project he is with, but let that man hold your coffee cup and relish in his tikka masala skills! They should have revised the slides to include his info, he deserved it. While Randall of Phunware was the host, a question from the audience got him talking about his project and I look forward to hearing more once they are public!

Other notable speakers were Brian Mac Mahon from Expert DOJO (loved how straightforward he was and his insight on VC's & the hustle there), Anthony Habayeb from BotChain who made some great points about the uncertainty of AI bots and their verification and tracking project for them. I wish I could have stayed for the last panel featuring Matt Sorum of Guns N' Roses (love the band), because I wanted to see if he was as on top of his game as Apolo Ohno was, and of course it was the entertainment panel which I am all about as well. Unfortunately I had a problem with a client and had to go back to my dungeon (aka my office) to take care of it before the close of the day.

I took time to visit almost every booth and talk to each briefly about their project. Overall, it was pretty much an ICO shill fest, but there were a few gems that I found. I asked every booth about their policy on US Residents investing in their ICO and all I heard all day long from EVERY booth was “Accredited Investor”. I fucking hate that word and it leaves a bad taste in my mouth. Just more of the old guard trying to keep as many out of the game as they can. My favorite booth was by far the All Public Art booth. Super creative and exactly what you would want from an art focused cryptocurrency project. I got to take this cool picture too (super sexy ‘Stache right?) thanks to the lovely Merel van der Wouden who was holding down the fort! They are based in LA and Merel told me the founder Graham Goddard also is lives in Long Beach, CA. I didn't get to talk to Graham, but I wouldn't be surprised if we had already been acquainted as I do a lot of work in the arts & music scene in my hometown (see LBMC, MMLB, LBI).

Enjoyed talking with Henning Rokling about his cryptocurrency space MMO called Parsec Frontiers. I am a gamer at heart and love online MMO's so this was right up my alley. The demo they showed me was pretty cool and you can build your own space ships out of materials you find. They even have an Ethereum shaped space station! I may just have to snatch up one of the first 900 pre-built ships though, thanks for the tips guys!

Rounding out my favorites are bubblo which is sort of a decentralized Yelp powered by AI that gives power over user generated data back to the users. ABRA has been around for a while, but it was good to see them out and about! They have an ACTUAL PRODUCT, and it's worth the look if you looking for a great mobile crypto investing solution. Gotta give a shoutout to Andre Urena from Uulala, love seeing this dude everywhere I go and he knows how to get you hyped! Last but not least is the Aigo project. Aigo is a tokenized AI marketplace where you can use, create, and trade things you have trained an AI system. Their video was pretty funny and I think this could be a great project.

As I was walking to my car I happened to run into Omar Bham from Crypt0's News who is also based in SoCal. I have been following his channels for a while now and it was nice to finally meet a fellow crypto content producer that is local. I also presented him with one of my limited edition ‘Stachecoins for all his hard work independently reporting crypto news and a VERY chance meeting in the parking garage!

I have to say, I am liking conventions more and more thanks to cryptocurrency. Maybe it's because I am so fascinated by the topic or maybe it just feels nice to be in a room of people that really have similar hopes, dreams, and a desire to change our future for the good of every human, not just those that already have it good. I would have liked to see more quality booths with projects that are not just trying to hawk their ICO's to (mostly) people who can't buy them. The speakers were the highlight as was talking with a few others and running into some of my followers! See you all at the next SoCal cryptocurrency conference!