Is EOS Over Hyped? A Simple Guide To Mainnet Launch 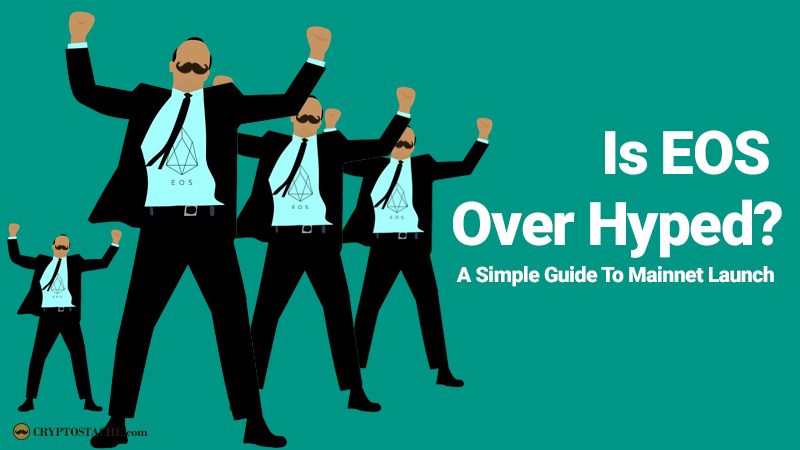 I have been an investor in EOS since August of 2017 and I will have to say that initially I bought in because of the hype… I know, I know, don't fall for the hype! The fact is that I did indeed buy EOS my first time because it was hyped up, and while this typically does not end well, with the mainnet launch eminent and the coin heading up in price I certainly got lucky with this one. Since there is so much going on in the EOS world lately I decided to do a beginners introduction to what exactly EOS is and how it will be used (theoretically) once it launches. Follow The ‘Stache as I break it down simply & give my predictions for it's success as a native token.

Lovingly referred to at times as “Ethereum On Steroids”, EOS aims to take the smart contract platform to a new level. While there are some similarities to Ethereum (if you don't know what Ethereum really is check out my Ethereum beginners guide here), but EOS is really trying to position themselves as a “decentralized operating system” versus just being an app development platform. The real standout features are that they are working to have an extremely scaleable solution for up to a million transactions per second! In comparison Visa does above 1500 transactions per second, Paypal about 180, Ethereum is in the 20 tx range, and the Bitcoin about 5 per second. If EOS can deliver on this HUGE claim, I think they will truly explode this year with developer usage.

The other major feature that has many chomping at the bit is they plan to completely eliminate user fees to allow for quick and easy deployment of decentralized applications. Remember when CryptoKitties blew up and clogged up the Ethereum network? As an end user, you don't want to have to pay fees to use basic features of a dApp and EOS understands this. These two major features combined with Delegated Proof of Stake (read this great explanation of DPoS here), and the flexibility they are building in to the platform to allow developers to update and fix problems with their dApps without effecting the network.

EOS launched its token sale in June of 2017 and decided to go with a year long “ICO” sale. They launched the EOS token as an ERC-20 token on the Ethereum blockchain.

“Wait, what? I thought EOS was different from Ethereum?”

It is, but they launched this ERC-20 token on Ethereum in advance of building out their platform and their native token. A native token is one that has it's own separate blockchain, and EOS is getting ready to launch their mainnet this summer where their native EOS coin will reside. This has been over a year in the making & the official launch date is June 1, 2018 at 22:59:59 UTC.

In preparation for this mainnet launch all holders of EOS tokens on the Ethereum blockchain (basically anyone who has purchased EOS ever), will need to register their EOS tokens with the company so they ensure they receive the 1:1 amount of EOS coin on the new EOS blockchain when it launches in June. If you are unsure if you have registered your tokens, or don't know how to get started on registering, see my article on how to register your EOS the easy way!

Is EOS Over Hyped?

EOS was the best performing coin in April and it shot up from an April low of $5.50 to just over $20 a coin! Since then it has been bouncing around the $18 range with lows in the $16 range. There is a LOT of hype around this coin right now and typically I tend to stay away from something so explosive in mentions & hype on social, but I have been an investor in EOS since August of last year and after reading the whitepaper I had a feeling it would be a big contender.

So is EOS over hyped in my opinion? No, not at all. If they can make good on the claims of almost unlimited scaleability with a million transactions per second, zero fees for users of the platform, and the fact that Dan Larimer (the creator of the Steem blockchain & Steemit.com, DPoS, BitShares) is the CTO for EOS gives me the utmost confidence that this is going to be a quality project. Steemit.com is one of my favorite social platforms and I find myself using it more than Facebook at times. While I don't really use BitShares (I probably should though!), its a rock solid platform and it shows the trail of incredibly successful projects that Dan Larimer as been a part of.

If all goes as planed for EOS with their mainnet launch I think EOS has the potential to gun for a top 3 spot in overall marketcap and be the next go-to platform for crypto developers. Typically the hype does not hold up, but I think here it does. I will continue to invest in EOS and follow their journey to become the defacto decentralized location for operating dApps.

The ‘Stache Will Ride That EOS Rocket To The Moon If They Let Me!