What Is NEO? A Beginners Intro To The NEO “Smart Economy” & NEO Gas 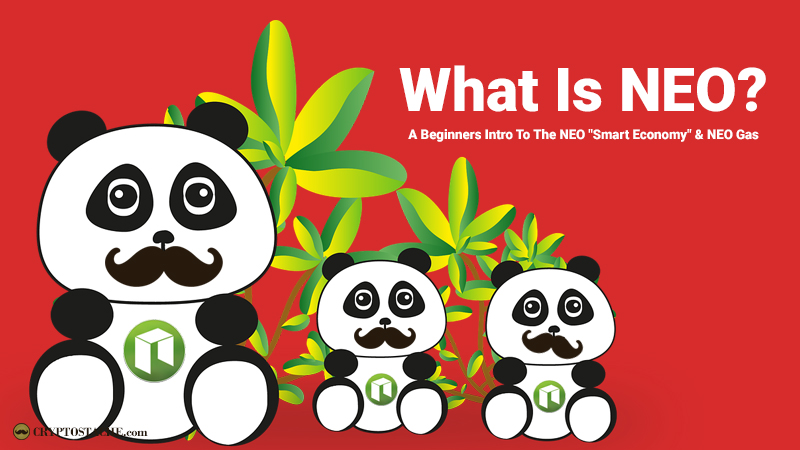 Like most advanced blockchain projects, NEO is NOT that easy to understand. While many people like to compare it to Ethereum (and it makes sense given their similar use cases), the NEO environment is a lot more complex in many ways. I dislike the common reference to NEO as being “China's Ethereum”, but you hear this quite often as well. Follow The ‘Stache as I break down NEO, NEO Gas, OnChain, and all the other moving parts of the NEO ecosystem in a simple way that is great for beginners, but still comprehensive enough for the experienced traders out there.

NEO By The Numbers

Before I get into the details of the platform, here is NEO by the numbers:

First, lets start off by recapping where NEO came from and why. Originally called “Antshares” when it launched in 2014, they re-branded to “NEO” in early 2017 (I JUST missed out on this big move!). The blockchain based project was the vision of founders Da Hongfei and Erik Zhang who also went on to form a “sister” company called OnChain. This is SUPER important to the story of NEO and it's overall direction as a cryptocurrency based blockchain project and I will explain why in a moment.

The vision with the re-branding of NEO and the creation of a sister company in OnChain is to fulfill a vision of a public-private ecosystem that is compliant with government rules and regulations. This “one-two-punch” combo of the public NEO platform and the private OnChain platform are intended to work together in the common goal of creating a “Smart Economy”. While OnChain as a company has received many accolades and NEO as a platform has great potential, neither have actually come to full fruition just yet and are currently still in development.

While NEO is meant to be a smart contracts platform somewhat similar to Ethereum, their tokens work a lot differently. Where Ethereum only has Ether and you must pay a small amount of Ether for each transaction (also confusingly called Gas), the NEO platform has separated these two functions. The NEO Token works like having “stock” in the platform and gives you voting rights, the GAS token is highly divisible and is what is used to pay for transactions & is the reward for “bookkeeper” nodes when they verify a transaction.

Hodling the NEO token in just about any location pays you GAS dividends each day. You don't need to “stake” them like some other Proof of Stake coins so just having some NEO in, lets say, your Binance account gives you a small amount of GAS each day. This GAS you get is part of the distribution of GAS that is paid when a transaction occurs, so you get a percentage of it equal to the amount of NEO you hold.

Proof of Stake, Byzantine, and Bookkeepers

While NEO is technically a “Proof of Stake” coin (which just means that instead of hardware to mine it like Bitcoin, people that hold or “stake” the coin get to verify transactions), it really works off of a Delegated Byzantine Fault Tolerance mechanism or dBFT for short. This is a little more complicated, but check the wiki here about the BFT problem.  NEO uses a modified version where 66% of all Bookkeeper nodes must agree on the transaction before it is committed to the blockchain.

For instance, if only 60% of nodes agreed on a Bookkeepers verification of the transaction it would be discarded and the process would begin again until consensus was achieved. This whole dBFT thing is just to keep things honest and the network moving fast, but because of the low number of nodes (I could only find info about 7+ initially) it is far less decentralized. A sacrifice the NEO team is willing to make, because, in my opinion, they are aiming to be the “governments blockchain platform” of China and China loves to be in control.

Now that we know the basics of how NEO started, what it's tokens do, and how transactions work, lets dive into its intended purpose; building the “Smart Economy” of the future!

Built For The Smart Economy

The NEO blockchain was built for a specific purpose, to be the development platform for what they call the “Smart Economy”. To achieve this, they have a bunch of “sub functions” that will play major parts in the near future and OnChain's private blockchains run on their Decentralized Network Architecture or DNA. As the NEO website states:

These 3 principals make up the foundation for the NEO ecosystem, so lets take a quick look at each one so we can see how they intend to shape the NEO offering when it is complete.

At this point you should probably have a basic understanding of what a Digital Asset is, but simply it is a digital representation of something that can be bought and sold online. Bitcoin is a digital asset, as are CryptoKitties. The NEO project aims to digitize all assets including things like real estate, cars, food, your precious iPhones and computers, you know, the important daily life stuff! Giving all physical items a digital representation is no easy task, and I will explain how NEO intends to do it further below in the article.

Digital identity is also a pretty straight forward one, but it will essentially create a verifiable way to track an individuals identity on a network like NEO. Sound like big brother stuff? Well that is because it is. Governments don't like anonymity, they want to be able to trace ever action you make directly back to you. That way if you scam someone or find a way to cheat the system you have left a “digital fingerprint” behind in every transaction that can be traced back to you. I don't necessarily agree with this direction, and I think we can find a medium ground with trustless transactions that don't reveal identity information similar to zk-Snarks technology of coins like ZCash & Komodo.

Much like Ethereum, NEO uses Smart Contracts to “make the wheels go round”. A smart contract is a digital contract that executes all by itself. If conditions of the contract are met, then it does A, if they are not met then it does B. These are basis for development platforms like NEO & Ethereum, but there are some major differences between the two platforms which I will cover shortly.

Bridging the NEO Gap To The Smart Economy

The NEO platform alone won't be able to do all the things it needs to in order to achieve the robust platform for the future Smart Economy they seek. In conjunction with OnChain solutions private blockchain functions and governmental compliance they will use several other mechanisms that I briefly outline below;

All of these additional solutions are going to need to work together in order to have a fully functioning NEO environment. Most are already in development, but don't seem to be connected yet from what I could find.

As I have noted through the article there are quite a lot of difference between the two while they share similar goals in being a development platform. Here are the key differences between NEO & Ethereum;

These are the major differences between the platforms that I have found, but what REALLY sets them apart is current and future use cases. Ethereum is the reigning champion when it comes to smart contracts development platforms. Currently, NEO does not have my DApps running on it's platform and in this respect I feel it is very far behind Ethereum which is pretty much the king of DApps due to its stupid simple ERC-20 token standard implementation.

NEO is building for the future, which is great, but it has quite the uphill battle if it truly intends to take on Ethereum as a decentralized development platform.

How I See This All Playing Out

While NEO is a very solid project in development and working towards a very distinct goal of being a government approved Smart Economy platform, they are far behind in the DApp game. Ethereum has some major drawbacks (speed, PoW, etc), but with so many DApp's already operating and on the platform and a solid “leader” in Vitalik Buterin they are going to be hard to beat even in the long run.

In my opinion, China is all about keeping it “China”. This is why we have Amazon and they have Alibaba, we have Facebook and they have WeChat. China likes to keep things “in-house” so they can have complete control over it. This is where I see a place for NEO in the near future, as the state approved blockchain platform that will comply fully with their rules, regulations, and ultimately censorship. This does not mean that NEO is a bad project, but rather they understand all too well what they need to do to be successful in their country first, and the rest of the world second.

WHEW! That was quite a long one, but it is a VERY complex project and I tried to simplify it as much as possible. That's all for today, but until next time…