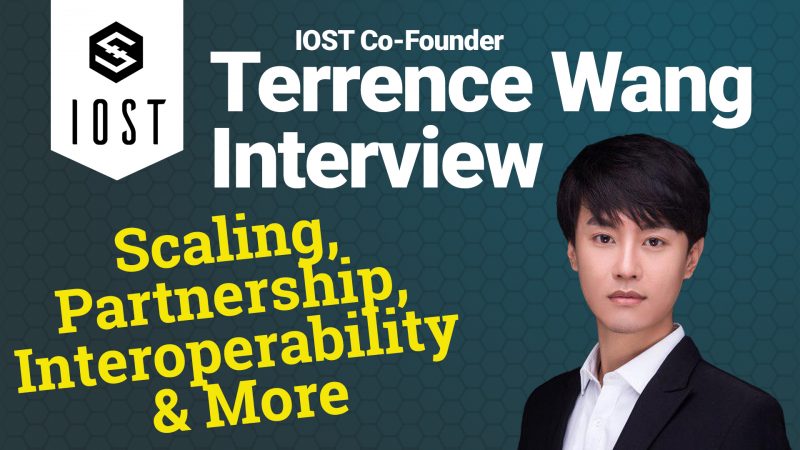 I have been involved in the IOST project for almost 8 months now and while I have done a lot of highlights of dapps, games, news, partnerships and the like, I have never had a chance to directly interview the team. The IOST team is hard at work in the background, but I was happy to be able to get a few minutes of time from IOST Co-Founder Terrence Wang to ask him a few questions that I myself have as well as a few questions from all my supporters!

‘Stache: Tell me a little about your background Terrence. What did you do before helping to start IOST?

Terrence: I am an ex-Uber, ex-Microsoft software engineer. I used to study computer science at Princeton University, and after college, I worked in the Bay Area for several years before I went back to China started my crypto journey with IOST.

‘S: What problem did you create IOST to solve?

T: We created IOST to make it the underlying architecture for online services that meets the security and scalability needs of a decentralized economy.

‘S: How do you plan on solving the issue of sharding & scalability on IOST versus what has been done on other major competitors like Ethereum, TRON, and EOS?

T: Our focus is on PoB, instead of sharding at the moment. IOST has reached the similar level of scalaility as EOS, with a better decentralization realization. Our Servi system enabled even the Servi node with the least number of votes among our 60+ block producers to have the opportunity to produce blocks, comparing to the 21 biggest nodes holding up the block-production spots rather unshakably in EOS and 27 super representatives in TRON.

‘S: Since mainnet launch we have seen a lot of dapps built on top of the IOST network. Have you used any or played any games on IOST? If so, what was your favorite one?

T: Have been trying Eternal Fafnir since its beta test. It is a blockchain role-playing game where players can summon four dauntless warriors to challenge evil monsters and collect fallen items.
One of the most impressive parts of Eternal Fafnir is its high-quality graphics. The graphics have a western magic style that outruns most blcockchain games. Besides, each character in the game has separate growing path and different skills. Players can decide which path they would like to pursue. The game is easy to get on board with. Simple operations and auto mode make it fun and smooth to play with. I had a pretty good gaming experience with them.

‘S: Do you plan on opening up a development bounty to help increase usage of IOST as a dapp platform? I believe there is a fund already established for this?

T: Yes, we have Featured DApps Support Program for our DApp developers, which was launched by IOST and Pioneer Fund, an exclusive fund focused on DApps under the BlueHill Foundation. It is open for submission to all DApp teams who have released DApp(s) on IOST mainnet. Applicants are required to specify their operation objectives such as account number, traffic and DAU in their application. Once approved by IOST, the operation plan will gain 70% of operation budget from IOST first and the remaining 30% later if the actual outcome matches the one stated in the application. For more information: Bluehill Announcement + IOST Launchpad Announcement

‘S: How do projects like OnBlock and Emogi Netowrk fit into the overall future plans for the IOST network and how closely do you work with these types of projects?

T: As an important investor and supporter of both OnBlock and Emogi projects, IOST is working closely with the two and has great confidence and faith in them. As a growing exchange, OB helps promote IOST and attracts a great number of new users to the ecosystem. It is an irreplaceable player in the diversified IOST ecosystem, providing IOST users with a secure and stable trading and Dapp exploration platform. At the same time, it offers great networking opportunities in the blockchain industry to IOST.

Emogi’s contributions to the ecosystem are demonstrated in two areas: real world mass adoption and user acquisition. As the first IOST’s major effort in real world application, the short video platform Bermi and its innovative token economy gained great traction and success. It is another strong booster in the IOST ecosystem and has successfully increased IOST’s brand awareness with its 6 million user base worldwide, especially in Latin America.

‘S: IOST recently launched a new website, but it seems the roadmap has been removed. Was there a reason for that and what major milestones can we expect in 2020?

T: We released our Back To Da Moon Plan in early August. And the plan for 2020 is still under discussion. We will keep our community members posted once it is out.

‘S: IOST keeps brining on some amazing partnerships, which one are you most excited about and why?

T: The partnership that excites us the most is the long running collaboration that we have with the Singapore government to mutually grow the blockchain ecosystem value and develop progressive blockchain technology. Back in May, IOST partnered up with Enterprise Singapore to support enterprise blockchain projects and give grants to promising startup founders. In July, IOST attended the National Blockchain Challenge as a corporate partner. It is a 3-day blockchain hackathon supported by SkillsFuture Singapore, a government agency dedicated to workforce upskilling. We were glad to notice that in the challenge, most of the developers chose to code on either IOST or Ethereum for their choice of platform. Most recently, the Infocomm Media Development Authority (IMDA) supports IOST by holding a challenge to solve for interoperability between IOST and Ethereum. We are grateful to receive such comprehensive support from a world class government, and this will play a key role in the growth and international expansion of IOST going forward.

‘S: Cross-chain interoperability is a major milestone for IOST, what progress has been made on this front?

T: A couple of days ago, together with Singapore Infocomm Media Development Authority (IMDA) , IOST initiated a challenge and offered 35,000 SGD to the problem solver. Later in the Q4, we also plan to run hackathons that include interoperability as part of the development theme to collect all as many solutions as possible to solve this question.

‘S: Being a developer myself, I always have a few projects going on. Are you working on any other interesting projects right now?

T: Nope, I am focused on IOST and simply have no time for other projects.

A big thanks to Terrence for this interview, we tried really really hard to get a video interview, but the VPN connection from China was not playing nice! I hope you enjoyed this and it gave you some insight into the IOST as it currently stands and the future of the project!

That's all for now, until next time…