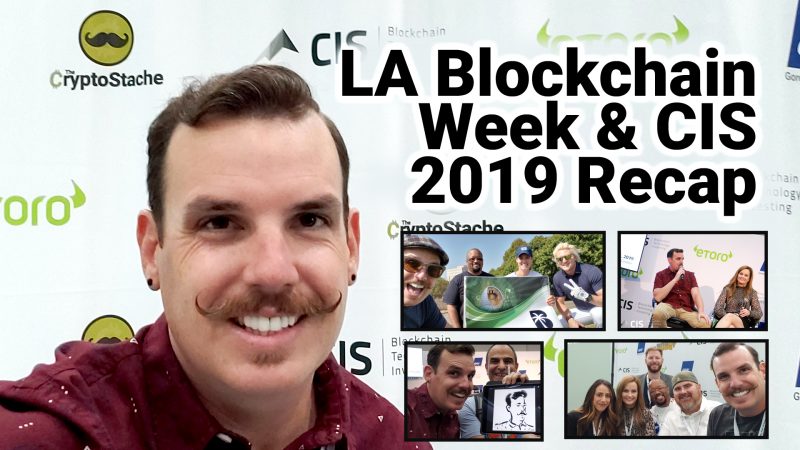 I never make it on time to Crypto Invest Summit. The Southern California traffic gods just won't allow me to get up to the LA Convention center by 9 am, so as Tim Draper is right in the middle of his keynote with my buddy Peter McCormack, I slide right into a seat in the main conference hall just in time to catch a few great nuggets of wisdom including why Tim thinks we should just “let the technology rip”.

CIS has been my staple hometown cryptocurrency conference here in California and despite the lower attendance this October, I had a great time and connected with some interesting people and projects. Follow the ‘Stache as I breakdown all the things I saw and did in this quick recap of LA Blockchain Week!

While I have been to the last 4 or 5 Crypto Invest Summits, this year was really the first year branded as “LA Blockchain Week”. I tried to make it out to as many events as I could, but I was excited to kick off LA Blockchain week at the first HODL Masters Crypto Golf Tournament. Now, I am no golfer by any means… I can swing a club, short game is not bad (I play a LOT of mini-golf), and I know the basics. This event was put on by my good friends over at Crypto Blockchain Plug along with support from the amazing women at Melrose PR and our host Angelique on the Links.

There were quite a few people there and the event kicked off with some driving rang practice and a putting competition. Then we teamed up in groups of 4 and headed out to play 9 holes! I got to play with a great group of my friends who included Jason Nelson from Dragonwolf Tech, Kelley Weaver of Melrose PR, and Austin Davis from Blockchain Beach.

It came up in conversation, or rather as we were slicing balls left and right towards other players, about why we yell “FOUR” when a ball is hit towards others on the course. None of us knew! We even asked our host and golf pro Angelique and she didn't know! Typically I would just #GTS (#googlethatshit), but for some reason I felt like this little life mystery was best left to be learned at a different time and in a different way…

We were the last group to go out and I guess we were quite slow because by the time we got back to the club house everyone else had finished, eaten lunch, done prizes, and took a group photo without us! I was a little disappointed with being left out (not intentionally), but all in all it was a killer event that I enjoyed a ton!

Hat's off to all involved! On to CIS!

Just after I slipped into the main conference hall to hear Tim Draper speak on the first day of CIS  he jumped into government regulation and entertained the idea of what would have happened if the US government took a “hands off” approach to regulating the emerging ICO movement in 2017. While ICO's certainly had their issues, the idea behind them was revolutionary in my opinion and the potential for direct consumer investment in “startup” like projects was huge. “What would have happened if we just let the technology rip?”, Tim proposed.

He also had some interesting things to say about a Bitcoin government transaction tax which I explored more with him, along with comparing his eyebrows to my mustache, in this really quick interview I did with him on the spot! Check it out below:

Everyone was pretty excited about Tim speaking and hanging out on the convention floor. While CIS is always great, I will say that this October's conference was noticeably smaller and less well attended than all the previous conferences they have held. The panel guests were not as impressive as previous years (Steve Wozniak & Charlie Lee keynoted previously) and there was quite the lack of excitement in the air after Tim left the event. I think this is partly due to overall market sentiment around crypto right now, but could also be a bit of over saturation as well. CIS is held in both the spring time AND in fall so it is twice a year. 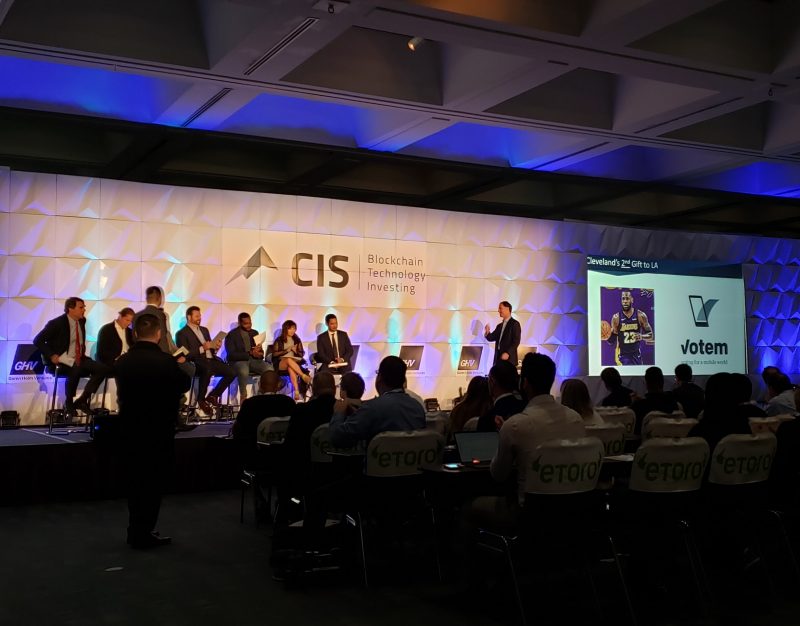 I enjoyed the Shark-Tank-style showdown between 4 crypto based companies where each got to pitch their idea to a stacked panel of judges (including Tim) for a chance at 50k! The presentation from Votem, a blockchain based online voting system, was my favorite even though they did not end up winning.

Just before lunch I also caught my friend Ann Willmott's panel she moderated on how blockchain fuels disruption. The two guys on each end really got into a heated debate that I enjoyed and respected in this day and age of the keyboard jockey comment warrior. I think both were on a similar track, but the message overall is that blockchain is going to significantly change the major corporation landscape just like the internet did in it's coming of age. 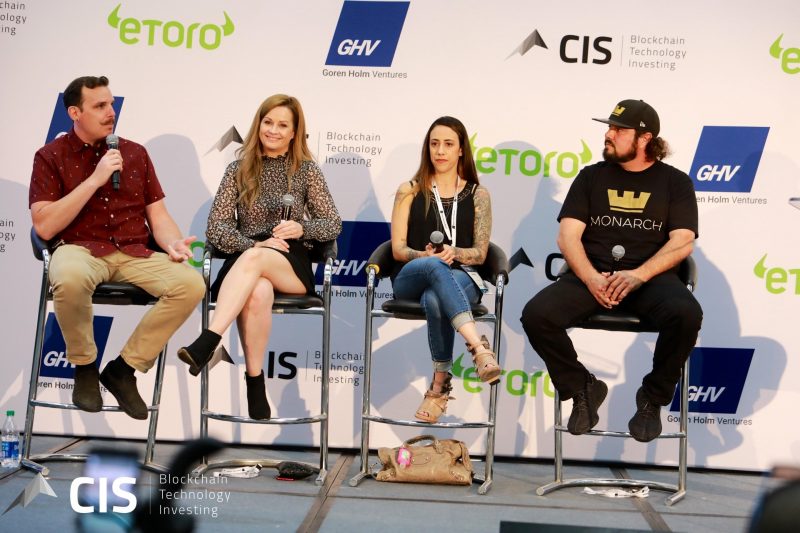 After wandering around the conference floor for a while and getting a meager lunch onsite, it was just about time for the first panel I was speaking on! I joined my good friends CryptoWendyO, Crypto Beadles, & Lisa N. Edwards on stage for a panel on the social impact on cryptocurrencies that was moderated by Jon Fargo from LunarCrush. We drilled down into some interesting topics including how we deal with trolls, the way we use social media to help others, & mental health and how that all wraps back into what is happening online in the social world and what it means in the smaller cryptocurrency ecosystem. Here are a few more fun shots from this panel: 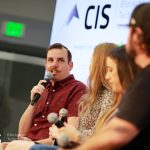 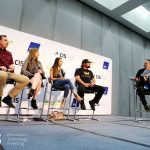 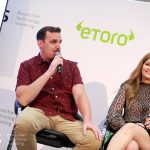 After I got off stage this great artist Joe Chiappetta showed me a quick sketch he did of me while up there. How cool is that?!? 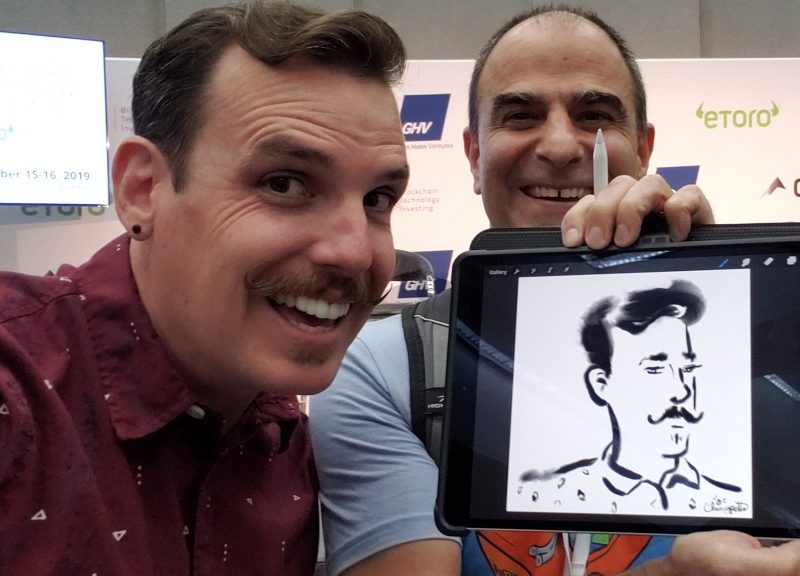 Between this panel and the one I was moderating on the big stage, I just bounced around talking to people. I did a few interviews for other people's channels and hung out with some friends. Here are a few shots from the day: 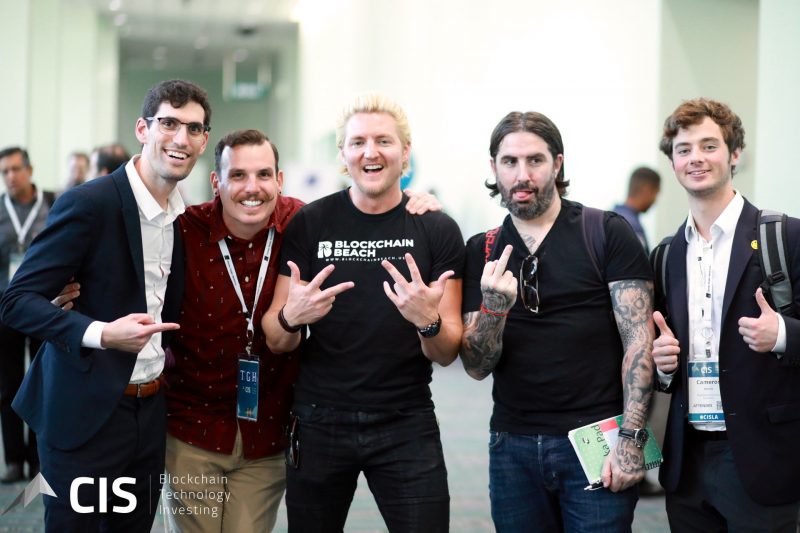 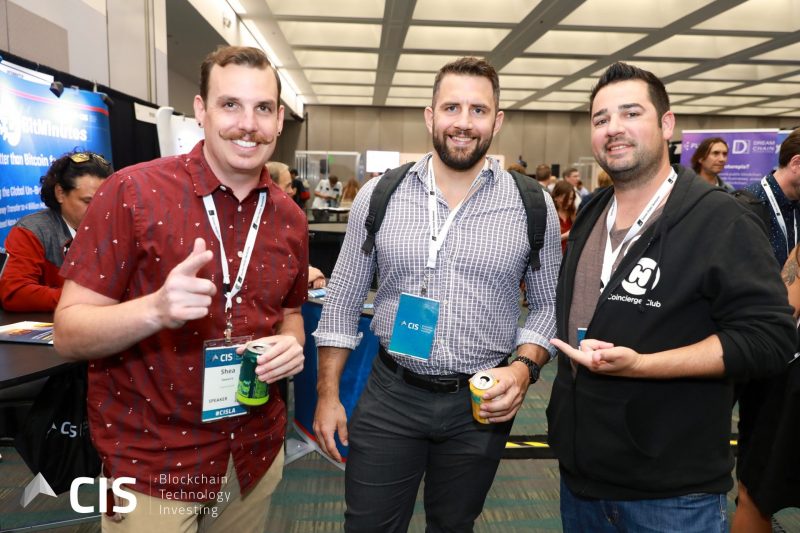 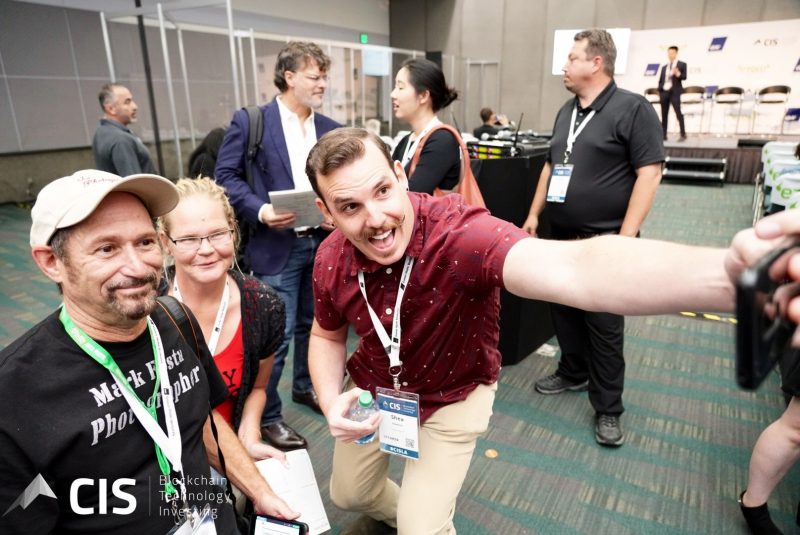 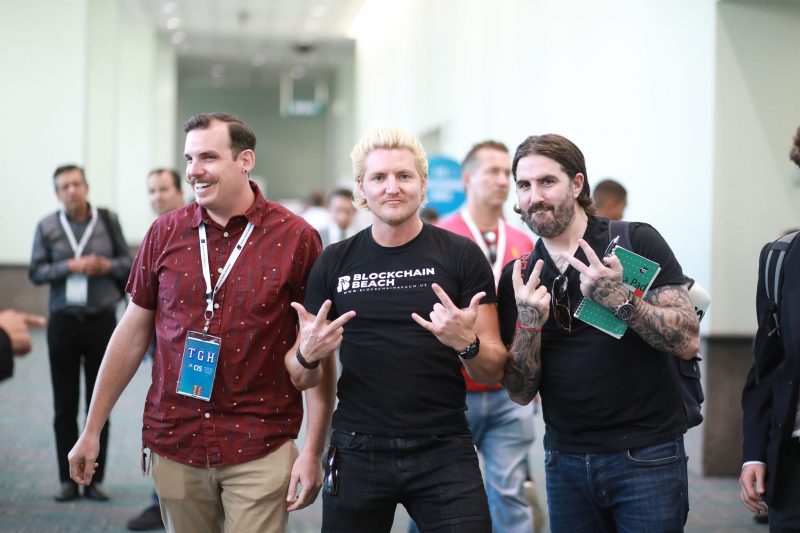 Gaming & ESports On The Blockchain Panel

I was thrilled and excited to once again get to speak on the main stage of CIS on the topic of gaming & blockchain. This was a “redemption” panel of sorts as I also moderated this same talk earlier in 2019 but all my panelists were from the gambling world and had no idea about anything happening in gaming. 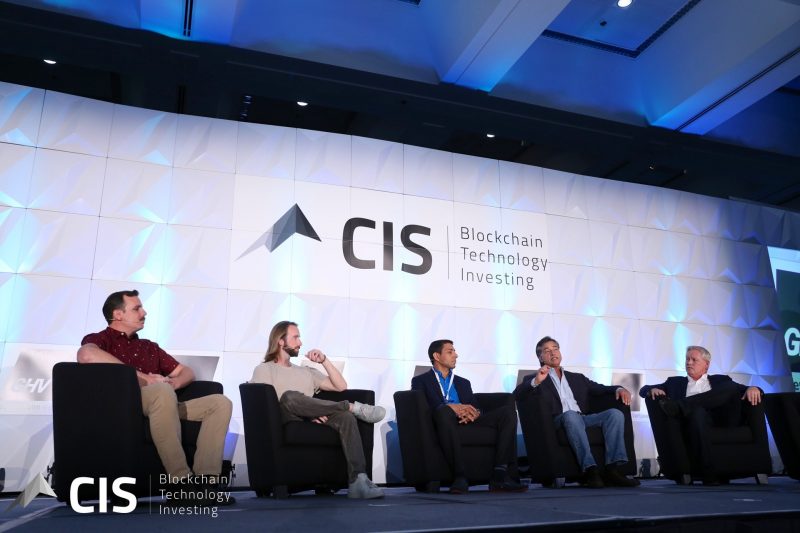 The lineup for this panel was stellar and I had some great questions lined up for my guests Don Goode, Lee Jacobson, Everett Carney, and Jaideep Sharma. While the room was pretty dead by this time (we had the last panel on the main stage for day 1 and there were maybe 75 people left in the room), I think the conversation that we had on stage was fun, light, and informative.

Look for a full video for this panel soon!

Some additional shots of the panel and that killer ‘stache! 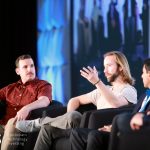 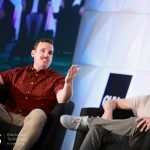 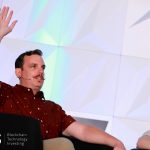 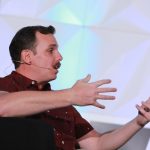 The first day wound down with the obligatory mixer on the conference floor which is always fun. I had a few beers and talked with a few more interesting people including a guy from Chainalysis. I didn't stay too long as I wanted to hit the TRON meetup at Boomtown Brewery that CryptoWendyO was hosting. You simply can't beat free tacos and beer after a whole day of conferencing!

I JUST barely made this photo as I came out of the bathroom just as they were about to take it. I dashed to a spot in front and the lady in red gave me the evil eye, lol. 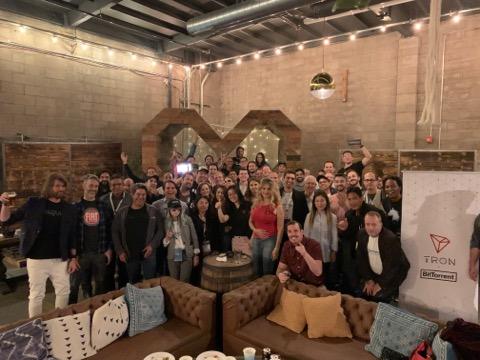 I got to CIS a bit late on the second day, but it was pretty much a ghost town when I got there. I didn't have anything in particular lined up except an interview with Give Bitcoin founder Cory Klippsten. Gifting Bitcoin to friends and family that have no idea what it is, why it exists, or how to use it is quite hard to do. I loved what the Give Bitcoin group is doing to help fill in that gap with education and time lock features. Watch my quick interview below:

After my interview I took this photo of all the friends hanging out before I headed out to lunch with my good friend BitBoy and our buddy Quinn, MidEarthCrypto.

Quinn is a great guy and it was cool to talk with him about life over a few beers while BitBoy complained about his non-keto compliant hot wings. While deciding to get another beer at a different spot we ran into Catherine Coley (CEO of Binance.us!) and Kelley Weaver at lunch and sat down for a random chat before all of us heading our separate ways back to the crypto grind!

The Sum Of All Events

I really enjoy going to events with all these amazing people. Sure, this CIS was a bit sparse on attendance and panel guest, but I made the most of it and tried to foster as many relationships as I could while keeping my panels and speaking engagements fun and light. Looking at the industry as a whole, I believe that we will see renewed interest in crypto next year and this will spur more and more first-timers to come to events like Crypto Invest Summit as they keep it relatively affordable with a lot of value still packed in.

See everyone in spring for CIS 2020, but until then…