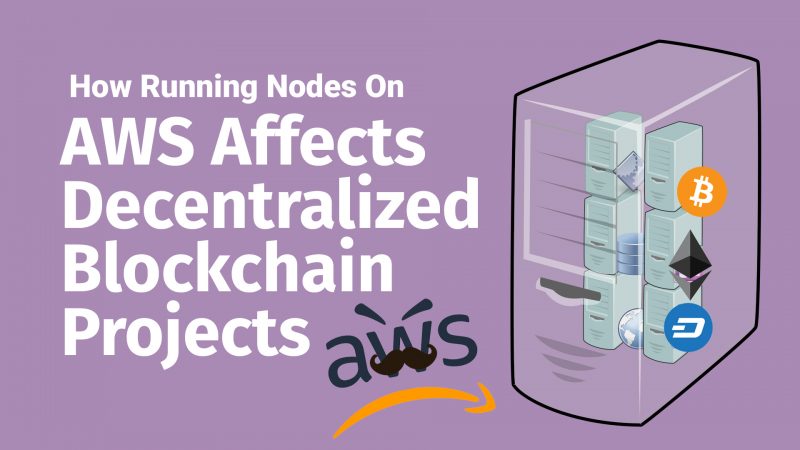 Blockchain and Cryptocurrencies are supposed to protect us from one single point of failure and offer a decentralized solution to many problems, but as it turns out there might be an issue in the way nodes (computers that support the network by relaying and validating transactions) are being run.

According to research done by Chainstack.com, a snapshot done on September 20, 2019, shows us that 61.6% of Ethereum nodes are run on various cloud hosting platforms with the most popular being Amazon Web Services (AWS) with 24.6% of the total share, followed by Alibaba Cloud and Google Cloud with 5.5 and 5.4% respectively.

It seems crazy and it makes sense, after all, it is easy to just set up a node on a cloud server without the need to buy all the hardware and continuously maintain it while making sure the server is running 24/7. Who wants to deal with all of that?

So what does it mean for the Crypto space?

Basically, large companies that provide digital cloud services such as Amazon, Alibaba and Google can theoretically cause disruptions to the network and ecosystem as a whole if they choose to do it or their servers experience a downtime. Not much for decentralization is it?

We have already witnessed the downside of what can happen if these services are disrupted as two major South Korean exchanges went completely offline during Amazon Web Services (AWS) breakdown in 2018 and this trend could only continue further, essentially, returning us to the centralized world we have been living before blockchain became popular and promised so much change.

Additionally, Amazon Web Services are offering customers to have their own blockchain run on their servers by offering a service called Amazon Managed Blockchain that allows them to create and manage a blockchain network using Ethereum or HyperLedger. However, Amazon Web Services (AWS) CEO Andy Jassy has also stated that they have not seen many examples where a classic database couldn’t solve the task required, therefore, should we really be worried?

If we can trust the cloud service providers to stay neutral and not interfere with the nodes that are being run on their servers, then all should stay as good as it is now. They make money from the resources they provide for running nodes on their servers so as long as it continues, why do something about it, especially if they believe that blockchain doesn’t even offer any significant advantage over a regular database.

Therefore, we have to keep an eye on who actually runs the nodes on the blockchain network to be sure it is indeed as decentralized as we would like it to be. As it turns out, nodes can be very easily run on cloud services such as AWS and it is hard to say no to this as the alternative of setting up and running your own server is not something a lot of people are interested in. Amazon with its AWS currently is the leader in doing so and if it means an easier and cheaper way to maintain blockchain shouldn’t we use it?

If the alternative is seeing most of the network being run by Chinese based private server farms, then probably it is for the best to trust large and established companies such as Amazon. In the long run, we need to be cautious about these situations if we truly want to build a decentralized internet.

Hope you liked that quick breakdown and it gave a LITTLE more insight into a little talked about issue when it comes to true decentralization. Until next time…