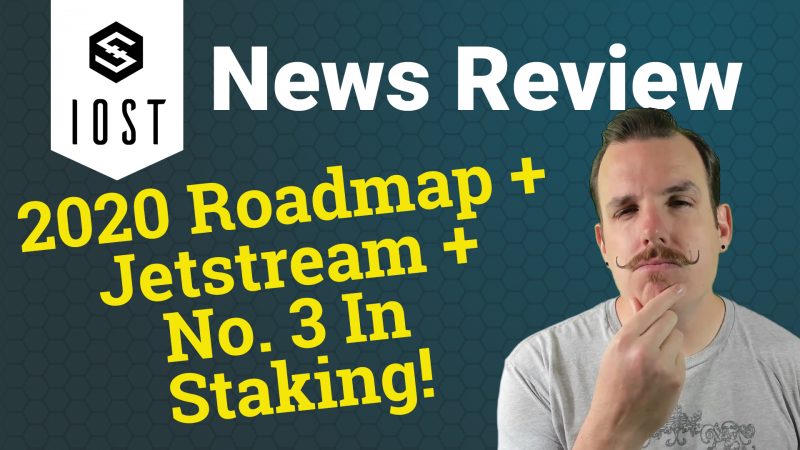 January 2020 has been a busy month for IOST, let’s take a look at the most important developments in my January edition of the IOST News Reivew. I will cover the recently announced 2020 roadmap, the results of the Q4 2019 contribution rewards as well as a new Chrome extension called Jetstream, and much more. Follow along with the ‘Stache to get insight on all the latest in the IOST community!

First of all, the new roadmap for 2020 has been unveiled by IOST and it is stacked with upcoming features and updates. It promises to further develop various areas of IOST with the aim of making it more open, connected and efficient to continue the strong momentum seen during 2019.

Some of the most important plans are:

Additionally, Jetstream offers a “Non-Blockchain-Like Experience” for creating new accounts by using the Google Oauth2, that offers the option to double-encrypt passwords and store them in Google Cloud. Great development for those who are not as tech-savvy and a step forward towards mass-adoption for sure.

Check it out here: https://www.cryptoninjas.net/2020/02/04/iost-and-klay-chrome-extension-dapp-wallet-jetstream-has-launched/

If you are a voter on my node, ioststache, then you might already know that we made Tier 2 again! It has been hard for me to put out a lot of IOST content over the last 2 quarters as things have been a bit slow in the development side, but with a new roadmap I hope there is more opportunity here in 2020.

Overall almost 53 million tokens will be paid out to the nodes in various tiers and categories. This, however, is only a half of total quarterly payouts as nodes will also receive “share of votes” rewards which will also amount to nearly 53 million IOST tokens.

Over the 5 tiers of nodes, the largest share of 50% or 26.5 million tokens will go to 22 nodes (including IGA members and friends like BitBoy Crypto, Metanyx, and more), followed by 25% to 19 tier 2 nodes as well as 12.5% to 21 tier 3 nodes. All rewards will be paid by the end of February. Cheers for all of those who have supported the network and my node specifically!

Recently the IOST community got together in Seoul to discuss all things IOST related and was hosted by the IOST Korea Branch with around 130 attending. This allowed for community members, journalists, industry leaders, investors, and others to share the achievements and future plans of IOST.

The three most important development considered were:

One of the developer core community members in Japan, PHI team, has established a subsidiary with the aim of entering Swiss and European markets and promoting the GUILD project.

GUILD is an IOST-powered decentralized autonomous organization (DAO) which aims to empower organizations to have the possibility to run entirely on smart contracts without any further management needed. Another great addition to potential use cases of IOST blockchain.

IOST – one of three most profitable staking coins

In a comparison by a medium user “Xen” a list of rewards that 500 USD worth of coins would generate, IOST can be seen as the 3rd most profitable staking coin with an estimated monthly return of 6.43 USD or 1041 coins. Higher rewards are currently seen for AVA and ICX with 7.5 and 7.89 USD per month respectively. IOST has constantly been at the top of the best returns for staking  and this further cements that with independent user tests.

Full comparison can be seen at: https://medium.com/@frankthepokemon/top-staking-reward-and-bonus-coins-2020-d0c0e9aab782

As you can see January has been a busy month for IOST! More functionality has been added and planned with Jetstream and GUILD and I look forward to how they are going to contribute to the ecosystem in the coming months.

Let me know if missed anything exciting, but until next time…