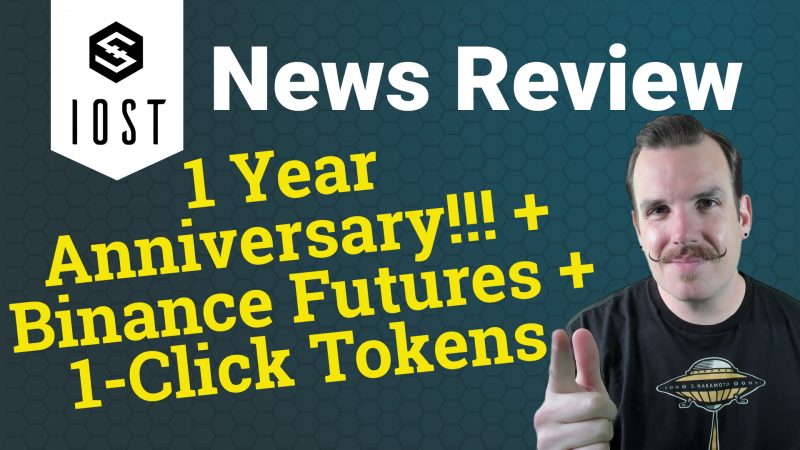 February has been another great month for IOST!

Developments such as the 1 year anniversary of the mainnet launch, a high ranking by China`s Government based blockchain index, further partnerships in Europe as well as a new feature that allows for easy creation of personal blockchains and margin trading on Binance have all been very positive for the IOST community.

Here is a quick summary of the most important developments during February:

IOST mainnet was launched on February 25th, 2019, therefore, it is time for a one-year celebration. In a medium.com post, the team announced that the 1-year anniversary event will be rescheduled to the middle of March due to concerns of Coronavirus prevention and control regulations in China.

Overall the project has achieved the support of more than 500k members and the best staking community with over 400 partner nodes around the world. Get ready for some gifts as the IOST team promises several celebratory events as well as gifts for the whole community.

According to the Chinese Government-backed China’s Center for Information and Industry Development, IOST has been ranked 6th among 37 crypto projects. It was previously not listed in the CCDI`s index, however, this month it was added together with GSX and has already established a strong position in the rankings among other well-established blockchains such as EOS, TRON, Ethereum, Lisk and more.

This will for sure help to spread the popularity of IOST in China and potentially help IOST gain more traction in the whole region.

Another great development for IOST this month is the introduction of “One-Click Token Launch”. This will allow anyone to launch their own IRC-20 token (similar to an ERC-20 token) in just a few minutes as it takes only 4 simple steps which can be done using popular iWallet and Jetstream Chrome extension.

The development team “IOST TOOL” promises to continue working further to bring other token formats in the future. Further instruction on how it is done can be read on IOST official medium.com page.

Earlier this month my friends at iOST.watch made a comprehensive comparison between IOST and EOS.

The comparison mentioned that both are currently achieving much higher transaction bandwidth than Ethereum with 4k for EOS and 8k for IOST and continue to push development to reach even further speeds with the plans to reach 100k TPS.

IOST currently has a higher degree of decentralization of consensus mechanism and a better resource allocation management model than EOST, however, IOST does fall behind on the number of dapps being developed on the platform.

I really recommend checking this article out for those of you who are interested in the technical details and differences between these blockchains.

Binance now offers IOST/USDT Perpetual Contract with Up to 50x Leverage, great news for those who like to put a bit more risk. This puts IOST in a group of several strong cryptocurrencies and will likely lead to further growth in popularity for the project. Read more about the announcement here.

On February 7th, an announcement was made that ditCraft and Vault Wines Join the IOST Ecosystem as further expansion in Europe continues for the IOST foundation.

Vault Wines looks to use the blockchanin for product traceability and anti-counterfeiting while ditCraft looks to decentralize software development processes by using blockchain as an incentive mechanism in addition to a system of governance.

Additionally, a new alliance has been made at a DAO-themed event in Europe with over 40 other blockchain industry peers attending.

Overall, this month has been full of positive developments for the IOST community. Launch of IOST margin trading on Binance could lead towards increased volume in the upcoming weeks and increase interest from traders and could be the one development that impacts the price short-term.

The rest of the news is great for the long-term outlook as partnerships in Europe and high ranking in China will likely raise overall interest in IOST, therefore, I look forward to what we will see next month!

Stay tuned for the next months edition of IOST monthly news review and in case you missed it last month, check out my January news review.